My visit with the Martini Club

Happy Sunday, everyone, and happy Memorial day to my American pals.

It's going to be steamy hot and humid here in Minnesota. I'm hoping to get some decent writing done, and then Mr. Crane and I are going off to our friend's home where we'll hang out and have fun and do some grilling.

But this morning I'm at the Martini Club over at the fabulous Penelope's Romance Reviews.

I'm talking about my days as a cocktail waitress and how I classified everyone by what they drank, and how I see that all differently now.

Big fun interview at Under the Covers Book Blog!

I had such a nice time chatting with the gang at Under the Covers. They had lots of good juicy questions...we talked about the Disillusionists, Gumby positions, upcoming projects and surprising fun facts about yours truly.

And there's a giveaway!

Come join me at the fantabulous Under the Cover Book Blog!
Posted by Carolyn Crane at 4:53 PM No comments:

Where I remember my fave fairy tale TOTALLY WRONG

I'm over at the Word Whores today for my Saturday post - the theme this week is Fairy Tales! Where I realize I remember my favorite fairy tale TOTALLY WRONG. lol.

I stopped over at lovely Limecello's blog this week to talk about being a writer in my 40s, and how you just can't use some cultural references anymore...like Gilligan. Or Mr. Bill!

But, can you still use "Don't do the crime if you can't do the time?" There's only one place to find out. Come see.

Writing my crazy little bank robber erotica romances started as a kind of secret lark of mine, and I tend to be a bashful and easily red-faced person, so I didn't link my names in public, or publicize that this is me. Also, an Annika Martin book is quite unlike a Carolyn Crane book - I wasn't sure what my readers would think.

Yet, I suppose if I'm promoting it on my own blog, or talking in public about Annika, I should rightfully claim her as myself! Because, I suppose it's just too wink-wink otherwise, or even misleading, like writing your own review under a secret name!!  And, that's sooooo not what I meant to do.

Phew! I can't believe I'm actually posting this!  But, I don't want to seem to be fooling anybody.
It's peeeeeople!!

Reader Alert: Fabulous freebies that popped up this weekend!

10 copies of FREE FALL up for grabs!
Free Fall (a My Immortals novella)
Highly recommended! Not only does Carolyn Jewel have a lovely name, but she writes some of my favorite books on the historical side and the PNR side. And, she's giving away 10 review copies of her hot and juicy PNR novella, FREE FALL. If you don't know her My Immortals series, this is a great place to dip in, and if you read it, what are you waiting for? 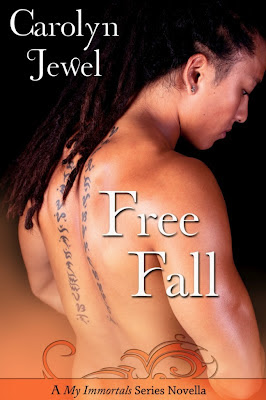 What I love about the My Immortals series is the combo of great paranormal worldbuilding along with strong, steamy romantic arcs that pack meaty emotional substance.

“dark, intensely sexy and has just a touch of kink…”
~Melindeeloo

“…the intensity between the two of them was scrumptious...

I couldn’t put it down. With plenty of action, steam, and powerful romance, this is a wonderful introduction to the series, and a great story in its own right.”
~The romanceaholic

Free Fall: the blurb:
Attorney Lys Fensic has spent her life controlling a psychic power that kills. Her ability to lock herself down falls apart when her ex, a mage, sends enslaved demons to kill her. In a psychic free fall, she turns to tough guy Telos Khunbish for help. But is he a mage as she’s always suspected or is he something far more dangerous?

Free Fall is set in the My Immortals series world where demons and magic-using humans called the magekind are not quite getting along. Most people have no idea they’re living in what amounts to a magical war-zone. (35,000 words)

The deal: FREE epub or kindle copies available - you just have to leaven an honest review on Amazon, B&N, a blog or elsewhere.
Get it: head over the Carolyn Jewel's blog!

Signed ARC of FULL BLOODED up for grabs!
Amanda Carlson has been making a stir with her novella BLOODED, the prequel to her werewolf series, which hits the stands on September 11th. But not everybody has to wait!! YOU could win a signed ARC! You'll have 4 whole months to make everyone jealous. 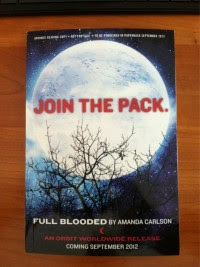 "A wild, wolfy ride that will have you howling for more!"
~Kristen Painter, author of Blood Rights

"Amanda Carlson's debut novel is a fast paced tale with a cliffhanger ending that left me panting for more. Full Blooded left me on the edge of my seat from cover to cover."
~New York Times bestselling author Faith Hunter

Blooded: the blurb:
It's not easy being a girl. It's even harder when you're the only girl in a family of werewolves. But it's next to impossible when your very existence spells out the doom of your race... Meet Jessica McClain -- she just became part of the pack.

In the vein of Kelley Armstrong and Patricia Briggs, a new urban fantasy that rewrites the werewolf myth...


The deal: One lucky commenter gets a signed paper ARC. Ends Tuesday
Get it: head over to Amanda Carlson's blog!
[edited note: oops- I had this wrong in an earlier version. It's 1 and not 5!] 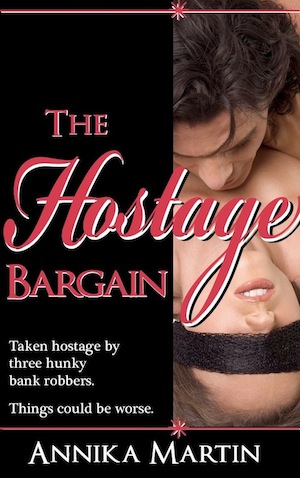 “The build up to the intimate scenes was almost as hot as the actual scenes.”
~Fiction Vixen Grade: B+

"Ms. Martin packs a lot of wallop into a relatively short novel. There is great dialogue here and good twists and turns in both the 'crime' (...adventure, suspense) and erotica aspects."
~A lot of Reading: 5 stars

The Blurb:
When small town girl Melinda Prescott is taken hostage by three hot bank robbers, she quickly discovers that a life of bank heists, luxury hotels, and kinky menages is way more exciting than working on the family farm. She should be scared of her dominating, fierce captors…but there’s something wicked inside her that’s craving to obey their every dark desire.

Melinda’s an all-too willing captive to three smoldering fugitives who are actually government agents…but is it all too good to be true? Will her delicious bandits overcome their own demons enough to let her in…or is she going to end up a victim of the world’s sexiest crime spree?

Warning: This book contains a sexy bank-robbers-and-their-captive sandwich, light bondage, spanking, teasing hints of domination, and a little play-time in a hot tub. Oh, and some all too delicious, villainous alpha heroes who bend the heroine to their will. (56k words)


The deal: 10 free epubs, kindle copies, or pdfs. You just have to leave an honest review somewhere: Amazon, B&N, Goodreads, a blog, etc
Get it: email Annika (aka me....) at annikamartin@ymail.com specifying file type/reader type. Details on Annika's blog.

Posted by Carolyn Crane at 10:07 AM No comments:

What kind of chocolate is your favorite villain?

So, have you ever thought about the different types of villains that are out there...and felt unsure what sort of chocolate candy they are like?

Well, there's help for you. I'm over at Buckeye Girl's fun books blog this week with a post that clears it all up - it lists the kinds of villains that exist, or at least all the ones I could think of...and reveals the chocolate they are most like. And I also talk about my own villains.

And if you are nice and leave a comment telling the villain type you prefer, you might win chocolate from me!! Come say hi at A Buckeye Girl Reads.
Posted by Carolyn Crane at 7:31 AM No comments: 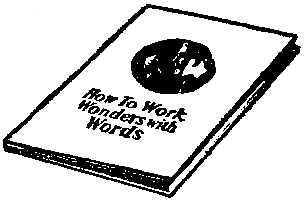 This week She-Wolf Reads has invited five of her favorite authors to come and talk about book influences, and it meant so much to me that I was one of those five.

So many books have influenced me - many different ones in different years - classics, children's books, nonfiction and more.

For this post I decided to talk about books that showed me very specific things that relate to what I"m writing now. Also, you can win books!! You can win one of my books, signed, and one of the books I list there!

Come on over to She-wolf!
Posted by Carolyn Crane at 8:51 AM No comments: