My 6-step process of back cover blurb writing

My scientific process of back cover blurb writing.

Step 2: Tear down and rewrite.

Step 3: Change tiny things in ways that nobody in their right mind would ever notice.

Step 4: Ask myself if 5 versions ago was actually better.

But I’m excited for this one to be done—it’s the blurb for AGAINST THE DARK, the first in my new sexy suspense spy series (Because I can't get enough of spies these days!).

I'm thinking Thursday. I just got the cover and I want to put them both out together. So excited!
Posted by Carolyn Crane at 8:06 AM 3 comments:

Devil's Luck gets a bonus epilogue, my horror at this email, and my continuing dorkathon

Devil's Luck is one of my very favorite stories I ever wrote, but a few months ago I got the burning idea it desperately needed an epilogue. Readers need to be able to learn what happened to the Simon and Fawna down the road. How could they go on not knowing? It really started bugging me. Haunting me. Nettling me. So I added one!
There are no internal changes to the story - only the bonus epilogue is new. And a new cover. 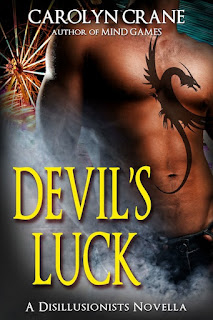 You can read the bonus epilogue for free on my website here.
Noooo!
I was horrified to come back from my vacation visiting Mom to find that Amazon sent out a notice to all past buyers of Devil's Luck that there are "significant editorial changes." It makes it sound like the story itself has changed, or there were problems or something, or I totally rewrote it.
Like I'm this freak! Noooooo!
There is only a bonus epilogue added to the end. That is all that has changed of the story - an epilogue tacked on. I called it 'the new epilogue edition' so people would know it's a new edition. It has a new cover. But you don't have to reread it - the core story is the same. There is merely a new epilogue, which is also available free on my site.
I thought it would be cool for Amazon readers to easily get the whole thing, but I wish the letter had not been so cryptic and sort of ominous.

If you bought Devil's Luck elsewhere


If you purchased Devil's Luck somewhere besides Amazon and want an intact version, email me at carolyn (@) authorcarolyncrane.com with your ereader type, and I'll send you the full file with the epilogue. If you got it in my newsletter, I'll have a newsletter option for this. Or, if you just want to see what happened after the story ended without going through the rigamarole of getting a new edition....
Epilogue available for free here.
Book itself available here: Amazon | BN | ARE | Smashwords
My dorkiness never ends
Yes, apparently this is the week of my looking like a total dork. I give you exhibit B, the sunscreen I picked out to use on the beach in Florida during a quick visit to my mom. Yes, it is a stick of sunscreen a bit larger than a chapstick. Think Bonne Bell. 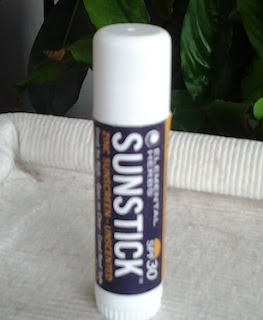 Imagine if you will, pasty Minnesotans Mr. and Mrs. Crane, not rubbing sunscreen onto each other like normal people, or spraying it on, but rather drawing it on. Painstakingly slowly. With a small stick. And you can't just put it on and rub it around, the entire body must have it drawn on. Think Michelangelo painting the ceiling of the Sistine Chapel. And afterwards, anyplace we didn't cover got burned. I was the worse sunscreen drawer, judging from the red lines on Mr. Crane's back.
However, I liked this stick sunscreen because it's zinc and chemical-free, which is key to me. I think it would be good for small applications - I'll likely use it for running.
It was actually so funny though. We would just be putting it on each other down on the beach and laughing.

****Edited to add:  I later learned that in fact, this stick IS designed for small areas and there is a chemical-free zinc lotion for...er...beach laying. lol. So next time, I think we will be going for the lotion. But now it's my favorite memento from our trip, sitting up on the bookshelf next to Gumby!
Book stuff
While in Florida, I read Beguiling the Beauty by Sherry Thomas, which was awesome, and also, some books on forensic linguistics, research for the second book in my new romantic suspense series that features hot, super smart agents.
I will have a cover and blurb for my first one, Dangerous Designs, soon. I haven't set a release date yet because I don't want to set one and change it. A likely release is this spring. Contrary to how I may appear, what with the freak Amazon email and the stick of sunscreen, I am really trying to be less of a freak!!