10 things about my Megabus trip 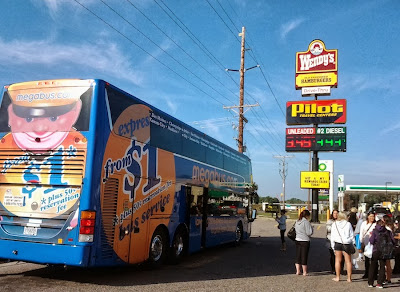 So, I took the Megabus to visit my mom. I am writing this from my perch on her very, very floral couch! I would love it if she'd bus instead of that long drive, so I was checking it out for her. I'm curious for myself, too - I can get a lot more done sitting on a bus instead of driving.

1. Megabus made the 350 mile trip faster than the Amtrak and as fast as a car. This was an express bus that had only one stop.

2. It wasn't seedy at all, like how bus trips sometimes used to be. Everybody was very nice.

3. It had wi-fi! I was going to do a post, but the Thrillionth page was blocked. Too hot for Megabus.

4. I sat next to a retired schoolteacher named Judy. She was super nice and it was her first Megabus ride, too. We showed each other pet pictures on the phone. Even on the Megabus, I am the queen of cat pictures.

5. TIP: Sit on the lower level of the megabus. That is the quiet level, apparently.

6. The woman in front of Judy and me was a Megabus Pro. Judy and I were pleased that the seat we chose was behind the Megabus Pro's seat, because Megabus Pro got there early to get her pick. (Lower level, middle).

7. The Megabus Pro booked 2 months in advance and got a round trip for $2.50. I paid $60 for Minneapolis to Milwaukee round trip.

8. Wear warm clothes. That was some serious AC!

9. I need one of those privacy computer screen thingys. Nice as Judy was, she couldn't help but look at my computer screen and see I was writing some type of book, and asking me about it. Well, don't we all glance at people's screens when they're inches away? I was SO glad I wasn't working on a super dirty part.

10. The photo is of us at our one stop in Mauston, WI. The driver was hilarious, and she promised she would leave anybody who took more than the allotted 20 minutes there. She gave enough details about what would happen to make me think she actually HAD left people there.
Posted by Carolyn Crane at 12:39 PM 6 comments: 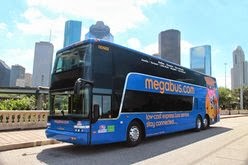 Okay, wish me luck, friends! I'm going on a 6-hour bus trip tomorrow to Milwaukee...that's right, on the bus!!

It's sort of recon for my elderly mom, who loves to drive to Minneapolis to visit me, but I would feel sooo much better if she took the bus. So I'm checking it out! I'm being the guinea pig.

Oh, I remember my college days of taking the seedy, scary Greyhound around. That's kind of all I can think of.

Supposedly busses have improved since them. I'll give a report, maybe even some pictures. Hey, maybe it will be better than driving! I hear they even have wi-fi now. Maybe I'll get some writing done.

Gulp. What's everyone else up to this weekend? 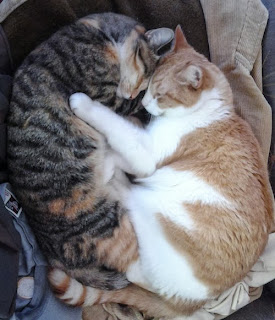 It's my birthday this weekend, so I'm going to be doing a big, fun giveaway on my author facebook page. You can win all kinds of books that just got released.

But you're going to have to work for it...by answering my chocolate trivia questions!! Hah!

And you don't have to like my page to play, but if you DO like my page, in my mind I will give you a big hug!

Have a great weekend, everybody!

What do authors ask other authors?

I'm over at Julie's Yummy Men & Kick Ass Chicks blog this week for a fun feature she has where authors ask each other questions.

I loved answering the questions, and I check back every Thursday now to see how the other authors answered. What could be better than that? How about the chance to win a copy of OFF THE EDGE?

Stop by and say hi at Yummy Men & Kick Ass Chicks here!
Posted by Carolyn Crane at 8:12 AM No comments: