So, after a lot of deliberation (like, do I go for a really obscure word that has little chance of survival, or something that I'd actually use?) I couldn't resist copying Megan Frampton and adopting the word squiriferous from savethewords.org. Here is my certificate. 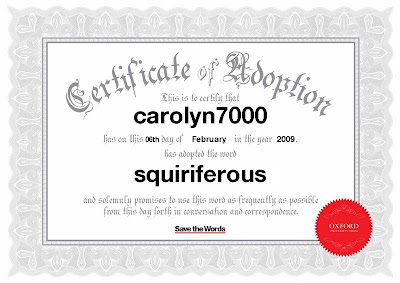 Squiriferous means to have the qualities of a gentleman. To be gentlemanly. Like a squire.

Isn't it a great word?

Oooh, the site is down now, but I'm sure it'll be back up soon if you want to get your own word, OR you can adopt squiriferous. I would encourage others to adopt squiriferous and use it. Who better than the romance community to save such a word?

Anyway, if you adopt or use it, send me links. You will be seeing me use it frequently here on the Thrillionth page.

As I noted, squiriferous has been adopted by Megan Frampton (see her post here) and other people, too. It's a ward of a blog called nostalgic home, and a fellow named DarkAeon over at DarkAeon's Demented Declarations, where he posted hot pictures of Dominic Cooper to illustrate, including the one I stole here.

Squiriferous was also adopted by a super creepy person on this site. WTF? I think we should call somebody in protective services.

Elsewhere, in an article about savethewords.org in the Gulf Daily News, the Voice of Bahrain, B. Comber writes: "'Squiriferous' (having the qualities of a gentleman) may, I fear, be difficult to bring into general circulation, there being so few squiriferous people around these days..."

I think we need to give this guy a copy of Games of Command or Sugar Daddy, because Branden Kel-Paten and Gage Travis are totally squiriferous.

And of course, John Thornton may well be the most squiriferous fellow I can think of. Except maybe my husband.

Incidentally, I suspect B. Comber is a made up name this writer uses for his GDN gig. I know a fake journalism name when I see one, being that I have two of them, which I will not tell here not wanting them linked to Carolyn Jean Jackson. A friend of mine has the fake journalism name of G. Samsa.

Anyway, Squiriferous. Now the official word of The Thrillionth page.
Posted by Carolyn Crane at 9:11 AM

Email ThisBlogThis!Share to TwitterShare to FacebookShare to Pinterest
Labels: squiriferous

What a great word! Yes to John from North and South!!

It sounds like a great word and I will work on using it...if I can remember how to spell it. LOL!

It sounds like a great word and I will work on using it...if I can remember how to spell it. LOL!

You've saved a GREAT word, Carolyn!!! It just flows beautifully. Okay, that's pretty sad that I'm over here repeating it as if to test it's quality, lol!!!

I love your word. Although I do worry that it will be misinterpreted as 'having the qualities of a squirrel'. If therefore, you decide to use it in a novel, I suggest that you adopt something along these lines:

"Don't you think that Mr Smith is the most gentlemanly man you have ever met?" simpered Elizabeth.

"Yes," Anthea replied. "He is truly the most squiriferous man I have ever had the pleasure to be acquainted with."

Congrats on your new word! Use it in good health. Sounds like a perfect historical romance review word. :-)

Great word! I'll try to use it in a sentence today, lol :)

It is a great word--it's hard to use everyday, though, for sure.

And swoonishness for Mr. Thornton. Mm.

Know who else is squiriferous??

That word is HOT.

""'Squiriferous' (having the qualities of a gentleman) may, I fear, be difficult to bring into general circulation"

Aha, but not in Romancelandia! "Squiriferous" could be handy in many a discussion of fictional characters.