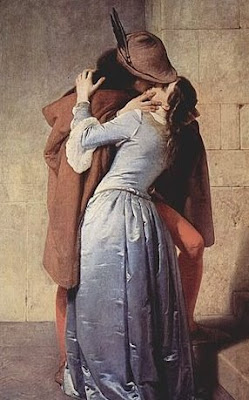 Okay, plot, quickly
Two hotshot lawyers with different worldviews compete for partnership. They've hated each other for eight years and as their competition heats up, so does their unexpected passion.
So, as some readers may recall, I'm a great fan of the angry sex in books. Great fan. As I found reading Practice Makes Perfect, I am just as big a fan of the angry kiss, or even this, the great angry almost kiss:

Payton felt her face flush with anger. "Really? Well you know what I think, J.D.?" She jabbed his chest with one of her fingers. "I think that you are an uptight, pony-owning, trickle-down-economics-loving, Scotch-on-the-rocks-drinking, my-wife-better-take-my-last-name sexist jerk!"

J.D. grabbed her hand and pulled it away. "Well, at least I'm not a stubborn, button-pushing, Prius-driving, chip-on-your-shoulder-holding, 'stay-at-home-mom' -is-the-eighth-dirty-word-thinking feminazi!" 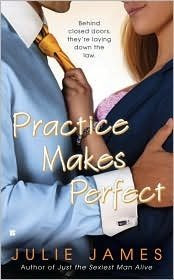 He had her pressed against the bookshelves, his body against hers, her hand pinned to her side as he glared down at her. She glared up at him right back.
He was furious. So was she.
Neither of them moved. And in that moment, the strangest thought popped into Payton's head.
She had the feeling that J.D. was going to kiss her.
And - even stranger - she had the feeling that she just might let him.
J.D. must have read the look on her face. Payton saw his eyes flash - but not with anger this time - and she felt his hand suddenly reach for the nape of her neck, the strength of his arms pulling her in, his head bending down to hers, and even as she cursed him for thinking she would ever, ever, allow it, she closed her eyes and parted her lips and -
"Excuse me."

[Quick digression: Wow, I have to say that I really sometimes learn so much from typing these passages out. Check out the paragraph breaks - I think they are really effective, and I wouldn't have noticed them at all if I hadn't been forced to retype here. {esp. He was furious. So was she. As a paragraph} If this was in my WIP, I wouldn't have thought of this; I imagine I'd have changed the pronouns around and stuck she was furious with the para above, and stuck so was he below, heading the next, or left it lonely. But this is so much better. Oh, the balance. Julie James, nice paragraphing! In fact, actually, maybe I wouldn't have put either furious bit in at all, thinking I'd shown it sufficiently, so why tell? (ye old Show don't tell rule) But this tell really adds. This is a place where telling enriches, and creates a sweet little balance. Just great.] 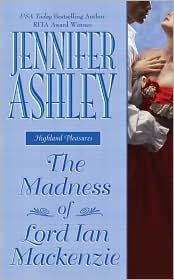 Ahem. Anyway, the librarian arrives and interrupts the angry almost-kiss. Isn't this scene just so wonderful? It comes sort of early, on page 80, and it's a fabulous moment of relief from the battle--a moment I wasn't expecting.
This is something that Practice Makes Perfect has in common with The Madness of Lord Ian MacKenzie, another book I greatly enjoyed: just when I'm expecting to be put through a little bit of hell by the author, she gives me flowers and candy. In both books, I'd find myself thinking, if only this would happen or, OMG, it would be so great if only...etc. etc. And then, the thing I wanted to happen would actually happen, right there, (and not 170 pages later.)
I am so full of admiration for authors who can do this.
Because I see it as such a difficult dance: obviously, if an author gives the reader too much candy and flowers, the book ends up being a bore with no tension and nothing to anticipate. But if the balance is the other way and it's all tension and angst with no relief and no little treats and tastes to keep us happy, and well, hell, that's no fun.
Renee recently wrote a post on angst fatigue in a historical (not either of these books), and a lot of people commented with the same problem. And I think this lack of bright spots of relief is part of it when I get angst fatigue. Though I also think it happens when I'm not given something wonderful to look forward to.
Anyway, more on Practice Makes Perfect later, but I wanted to say that I'm loving it for giving me candy and flowers at the just-perfect times while remaining exciting and fun to read.
Proper reviews: Madness at RRR, Practice Makes Perfect at RRR, PMP at Book Binge, PMP at Babbles. Actually, now that I've started this list, I realize most everyone has discussed both.
Image: Detail from the kiss by Francesco Hayez, from Wikimedia
Posted by Carolyn Crane at 9:10 AM

CJ - This is such a great post. You know, what I love about Julie's work is how adept she is at giving enough to keep the momentum barreling along, but she does it in sometimes unexpected ways. This is a perfect scene. You walk away from it feeling like you've been given something, but you know, you really haven't. You know?

It's not like they tore each other's clothes off and did the deed in the law library. But you *feel* like they did.

She's just a very, very smart writer. I love that her books are so smartly written and don't insult one's intelligence at all.

And wow, could I say "you know" more often? Sheesh. Find a new phrase, Kati!

Kati: I didn't find a lot of you knows. And look at me, have you ever noticed how I abuse 'totally?'
Anyway, yes, such a smart writer, that Julie James. I love the way real-life gender issues play here, too. And you're so right about this scene - nothing specific happens, and yet...

Oooh, her two books are soooo good! This is definitely a smart book with loads of tension. There are so many places in there where you feel like you need a cigarette and a shower after they have an encounter.

And I agree with Kati, I love it that James accepts that her readers and her characters are intelligent and starts from there.

I can't wait to see what you think when you're finished. I love the ending. Not to spoil it for you, but JD totally rocks. Just sayin. I can't wait for her next book!

::Spews Coffee All Over Computer Screen:::

You along with Julie James crack me up every time. OMG - you ROCK girl...

Going to get Windex and paper towel now...

Lori: Right, a cigarette and a shower, but only in the best way! LOL. When exactly is her next coming out? I should find out.

Lea: Aw, thanks! Though as a closet writer, isn't it interesting? The nice paras and the tell? Sigh.

Great post! I think I may have quoted the same scene in my review, or at least it just really sticks out for me, even months later. Thank you for pointing out in a writerly way why it works so well.

I just read Jennifer Crusie's Strange Bedpersons, which has a yuppy male lawyer named Jamieson who spars with a hippie gal, and it was pretty flat. I was reminded while reading SB how great PMP was.

This is a place where telling enriches, and creates a sweet little balance.

I NEED to 'suggest' PMP to my library ASAP!

Still need to read these two! But, I totally get you when you talk about that balance between anticipation and fulfillment of the readers' expectations.

It's funny about how you talk about angry sex. When I read Crash Into Me a couple of weeks ago, I totally remembered your post about that, and was so looking for the scene as I read the book! (Which was very hot.) Now, I know what I'll be looking for when I read PMP. Great excerpt, btw, and great post, CJ!

Thank you for this wonderful post! I hope you continue to enjoy the book.

It's so interesting to see your thoughts on approaching the scene as a writer. Funny, b/c when I wrote the scene, my thoughts were focused on a detail people probably don't even pay attention to: when J.D. grabs her hand. Originally, I just had Payton pointing in his face, and then he grabbed her hand, and I thought, "Oh, no... people will think that's too aggressive--he's invading her space." So I changed it so that Payton pokes him in the chest instead, thinking that if she touches him first, then J.D. should be able to do the same.

Thanks as well to everyone else for the kind words! I love Lori's line, "There are so many places in there where you feel like you need a cigarette and a shower after they have an encounter." So friggin' hilarious-- that could be a cover quote.

Wonderful post. You are so right on here. The tension it spot on. Thanks for the lesson.

Gosh I love your thoughts when you put them down like this. PMP is such a great book and of course you've captured such a great scene. Julie James really does keep us on our toes and heightens the expectations.

I love this book too and have recommending it to my buds who are burnt out on paranormals.

It takes a skilled writer to get me to enjoy a book about lawyers!