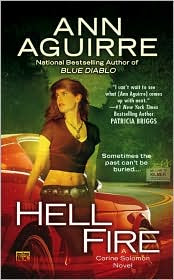 I just started Ann Aguirre's Hell Fire, and I'm loving it, and especially the freakass town of Kilmer, Georgia. It's in the middle of nowhere, and there's this gloomy "tunnel of trees" that our heroes, Corrine and Chance, drive through to get there. The drive there was cool, because it added to my feeling of the place being walled in by nature, somehow. Isolated. Strange. And when you get there, things are decrepit. The library seemed not to have been updated since 1967; it didn't even have PC terminals.
I found that, oddly, creepiest of all. I guess that shows where my values are. So, I'm excited about the sense of menace from the town. I always like when place is a strong character. A snippet:

It was weird and eerie, how little this place had changed. In some way, Kilmer struck me as the town time forgot. There were no restaurant chains, no big stores, not even a single Micky D's. Common sense offered "no money to be made" as the reason, but I wondered if there was more to it. The lack of modern touches seemed unnatural, creepy, rather than comforting. This small town offered the feeling of "I know where you live" instead of the security of recognizing all your neighbors.

LOL. ...the feeling of 'I know where you live' instead of the security of recognizing all your neighbors.
Right around this page, they contact a pal on the outside and asked him to look a few things up about Kilmer, and they are shocked to learn that the town doesn't exist when you search for it on the Internet. 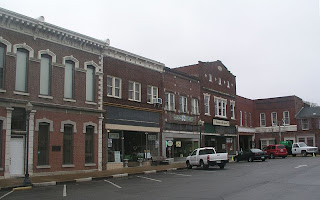 It says as much on the back cover of the book - that Kilmer doesn't seem to exist to the outside world - but I hadn't read the back stuff, so when I got to this part, I was like, Whoa!!! Chills! That, specifically, was my great moment in last night's reading.
Oh, you know what is weird that I just realized? Ann Aguirre also brings place to life hugely in her Sirantha Jax outer space series, with Grimspace being actually kind of like a place that is a living being. Or at least, that was how I related to it.
A lot of the authors I love bring place to life in a huge way. Jill Shalvis certainly does it in her Wilder series. And Jill Sorenson does it in her books, especially Set the Dark on Fire. I'm trying to think of other books that have such a strong sense of place, like where it's a character. Can anyone think of others?
Town Square photo is Gallitin, TN, by Ichabod, from wikimedia commons
Posted by Carolyn Crane at 8:53 AM

LOL - I actually touched on the place being a character in my post yesterday about Charles de Lint. :)

Oh, I meant to go check your rare saturday post.

One recent book that had a great sense of place was No Mercy by Lori Armstrong (aka Lorelei James). She really made South Dakota come alive for me, and what made this even better, imo, is that it's a location rarely written about.

Sounds like a book I should give a try.
A totally different kind of book that gave a really good sense of the city where the story is set in my opinion is 'Iris and Ruby' by Rosie Thomas.

LMAO! I loved that you got creeped out by the outdated library!

Oh I've just been blogging about setting too! The planets are aligning.

I recently hugely enjoyed pre-Revolution Paris in The Treasure Keeper by Shana Abe.

I love Ann Aguirre's novels. Her Sirantha Jax series and this one. However, I have to say, I'm not too crazy about this cover. The hair looks ...awkward. Maybe it's supposed to be windblown. The first cover (Blue Diablo) was way better. I also love the Grimspace covers too.

I have Hell Fire here to read, but I'm working on two books (working on reading not writing, I could never, ever, ever write a book) at the moment.