My fave slightly diabolical things about Through the Veil

Okay, I'm reading Through the Veil by Shiloh Walker and really loving it! And as my blogging feat on this Sunday, I shall now identify, without spoilers, my three fave slightly diabolical things about it!! 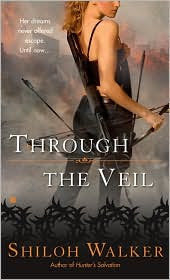 Fave slightly diabolical thing #1: The exquisite torture of waiting for the dual world heroine, Lee, to go super BADASS
Okay, a little background: At the opening of Through the Veil, the heroine Lee is always waking up battered and bruised. Also, she's a digital artist by profession, and really really good at creating these rich scenes of strange worlds, and battles, and a certain gorgeous warrior.
And, somewhere in another strange world, there is this horrible battle going on, and this strange woman just sort of appears at night to help out now and then but never stays. Hmmmm!!
Okay, can I say how much I love the invention of this character, whose dreaming self is mysteriously drawn to this alternate world, and whose dreaming self is also a really excellent fighter? And the characters there so wish she would stay. Especially one Kalen, who looks an awful lot like that guy she can draw really well.
Here, Kalen watching Lee and ruminating on an early page:

Lee came and went. She never risked herself for anything longer than a few hours a night. A few nights a week. Weeks would go by when she wasn't seen at all.
It cost them lives. People depended on her.
She had proved time and again she would only come when she couldn't stay away any longer. Her conscious self didn't even know what was going on.
She hid behind the veil of her memory, safe inside her normal world, where demons didn't exist, where everything was safety, security, and light.
Here, in this darker reality, where things existed whether she liked it or not, she could join them, save lives...but she refused.
Closing the distance between them, he loomed over her, staring down into a face he knew almost as well as his own. "When are you going to open your eyes, Lee?"

But of course, he's talking to her dream self. And she's like, WTF? Because she doesn't realize she's her dreaming self. Not to give anything away, but things get very interesting as she increases her involvement with that darker world. And frankly, much more interesting than the back blurb makes it sound. I found this whole dual nature thing to be such a strange and exciting character challenge. 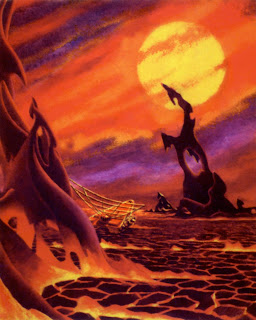 Fave slightly diabolical thing #2 The balance between harsh battlefield & yummy candy
Here's the two key things about being inside the book reading:
1. Through the Veil has a wonderfully dark and harsh battle zone. There are so many baddass details, like, our bedraggled enclave of heroes can't use their high tech stuff, even to make clothes, because it attracts the evil wyrms that the enemy loosed in their lands. And really, this society is so ruined by the enemy--this ruination stretches far and wide, and also deep through time. The darkness feels real and convincing. This is super balls-to-the-wall stuff with a good battle feeling being created.
2. Walker puts enough candy that you want to go there, stay there, read deep into the night. I feel like a book should always be a place where you want to spend time. If a setting is convincingly dark and hopeless, there should be other things that make it a good place to spend time: comeuppances, characters realizing interesting things, smutty goodness, and, of course, waiting excitedly for mild-mannered heroines to go badass or evil villains repenting and/or being ground to a pulp, ideally while wearing shocked expressions. Candy! Which this book has a lot of. Oh, how I love readerly candy.
I think the candy/darkness balance is not an easy one to achieve. As a reader, I don’t like being put through too much, but I don’t like being treated too kindly, either.
Fave slightly diabolical thing #3: Nuances of the enemy
I’m not going to get into spoilers, but the book is in the POV of the heroine and hero for like, 100 pages, and there’s this horrible enemy, and you always hear about this enemy, and you hate the enemy. And suddenly you're reading along and whack! You’re in the enemy’s head, and the enemy, while remaining frightening, becomes also nuanced.
I was like, whoa! (in a good way). and ah, let me put it this way: certain things pertaining to the enemy could go different ways. And there is a lot of tension building on the chessboard of the book, and hidden sly things she does…gah! * lips zipped *
Proper reviews: Aztec Lady's here.
Next book: Veil of Shadows, coming out September 2010!
Posted by Carolyn Crane at 8:48 AM

Are you dreaming as you write this blog post? Is this the real you or the dream you?

Diabolical is an appropriate word because I think of Shiloh as diabolical, but in a good way :) Loved this book.

Through the Veil sounds so good...

Ok, you convinced me: this book is going on my tbr list

And I completely agree with your points: the balance between the horrors and the... well, "candy" :grin: the anticipation, the sexual tension, etc. is just great--not to mention the characterization! Most excellent indeed!

Lea: And you'll be ready for Veil of Shadows!

@Carolyn: I blame you for me being broke as you introduced me to the bookdepository ;-)

And suddenly you're reading along and whack! You’re in the enemy’s head, and the enemy, while remaining frightening, becomes also nuanced.

I love a hero who is not just evilTM!