Look at our poor car! Buried. Luckily, it's on the side of the street
where it won't get towed. Until Tuesday. 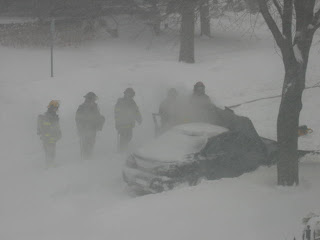 A million cars kept getting stuck. And still are. This
one was pushed to the side and left running and it CAUGHT ON FIRE! Flames were shooting
out its wheel wells. DH and I just stood at the window and watched. I didn't know at first that it had been left running, and I worried being buried in snow could have some combustion
effect on cars. DH laughed at me. Well, you're not supposed to bury electrical cords under rugs, right? 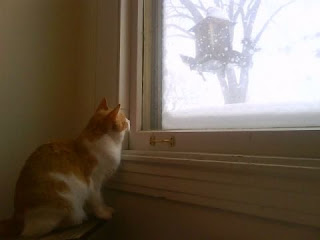 Kitty watching the birds at the feeder. Snowy day with many hungry birds to startle
by rearing up on ones hind legs, paws to window.
Posted by Carolyn Crane at 8:10 PM

At least my car's snowed into the parking lot...

Oh, veri word is adorket - that should SO be a word.

Tez: Kitty thanks you

Chris: Again feeling jealous of you and your parking lot. Really? 18? an adorket amount.

Because my kitty is more awesome than both your kitties combined, she would have channeled her inner Chuck Norris and helped put out the car fire.

LOL. That I would like to see. Cats LOVE water and snow and cars!

And hot firemen battling the elements where they would have to dry off...

I have bad news for you, KB. Allow me to refer you to this handy comparison of dogs vs cats in case of emergencies.

Also, any hot firemen would be wearing so much cold weather bunker gear that determining they're human would be about all you could manage.

This is after the firemen take off all their gear, jump in a hot shower and I walk into the bathroom by mistake as they are drying off with only a towel and nothing else.

Oh, that cartoon is so spot one. lol.

Chris: That cartoon is hilarious. Too true! LOL.

KB: Somebody needs to get firemen out of her system...or actually, maybe INTO her system.

Kitty looks so adorable concentrating o much on the birds :-D

Wow, you had *some* snow! Somehow I haven't yet met hunk firemen in real life, are they reserved for novel heroes, or I should be near fires more often? ;-)

Have a nice weekend Carolyn!

That poor car!!
And can you send some snow my way?

Stella: I bet with all those fireman plots, they are really getting some extra attention.

Um. I have bad news.

You have to move your car tonight!

We don't get snow in my part of California. People think it's a storms when it rains for more than a few hours.

Wow!
Now that's Winter.
Thank you for sharing those awesome pictures Carolyn!
All the best,
RKCharron

Ooooooo . . . saw all that snow and I once again became profoundly thankful I am in So. California. Saw the video on You Tube of the roof of the Metrodome collapsing because of all those 17 inches of snow. Ugh!! Glad I was there when it was warm and rainy instead of now. I love the kitty pic . . . even without snow our kitties sit and stare out the window. I often wonder what is going through their heads. Please, please, please stay warm!

I suppose for those who live with it, it isn't quite as magical but it looks pretty awesome from here.

I sent a picture to a friend in Idaho recently of my son on Santa's lap and she laughed as she'd never seen a Santa snap with a kid in shorts and sandals.

LOL! loving the fireman comments, so funny.
I never get snow where I live:( and I know u might say that's lucky but I want some :P

I like watching the birds at the feeder, too! ^_^

Cars setting on fire, not so much.

Have to comment once again . . . thought of you when I heard that the Univ. of Minn. was handing out shovels so volunteers could clear the football stadium for the Vikings game with my Bears. Gosh . . . I get hives when I think of all the years I had to shovel snow when living in the Midwest. Keep warm . . .

Catching up on blog hopping now that NaNo is over!

What a gorgeous kitty, we just lost ours, and I really miss the ornery old guy, makes me appreciate everyone else's all the more! Kitty therapy..

I'm glad we did get all the snow you all did, it's way to early in the year for diggin out! But, we've had the nastiest ice storms, lots of accidents caused... Hope the weather improves before Christmas gets here!

Wow. I vaguely remember snow. We only see it now when we go to Tahoe or the Sierras.

I don't get why the car caught fire, though.