My shocking and woeful cover drama...and YET ANOTHER NEW COVER

So, as I told everybody in tarnation on Wednesday, Mr. Real got an awesome new cover! And now I’m not going to use it!!

I was so excited about the cover, too! Because the angsty guy image captured the sweaty and muscular and tortured nature of my athletic hero, Paul. My fabulous designer and I were so psyched to find him. (Su of Earthly Charms, who I can’t recommend enough! She is amazing!)

We got the angsty guy image from a royalty-free stock site, where you look for pictures you like and then pay for the rights to use them. It’s where pretty much everyone who doesn’t have thousands of dollars to spend on a live model shoot or exclusive custom art or photography gets their images. The thing is, different people can pay to use the same photo. That’s why you often see the same images on different books.

And why you see funny posts like this one that my naughty friend Chris makes in her “Misadventures in Stock Photography" series.

So, I wasn’t too shocked when, as soon as I released the cover, I discovered angsty guy had appeared elsewhere. It’s an awesome photo! I can’t believe more people didn’t buy the rights to it. Here, a few other books I found out about after releasing my cover: 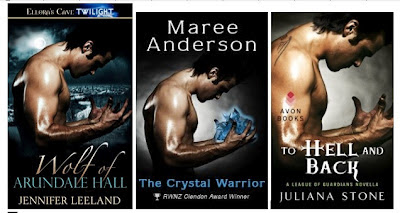 The big problem here: Juliana Stone!! *shakes fist at Juliana* (not really, she’s actually really nice). But I learned her e-novella, TO HELL AND BACK, far right, releases the exact same day as mine and it is the same genre.

There’s nothing illegal about our having the same photo – her publisher and I both paid the same money to get the non-exclusive rights to use it. But Juliana and I are both working in the paranormal genre, both have black color schemes, and both release on OCTOBER 30!!! What are the odds of that you ask? (Shoutout to Jeffe Kennedy).


The odds you will discover your awesome photo of a sweaty tortured guy
is already being used... 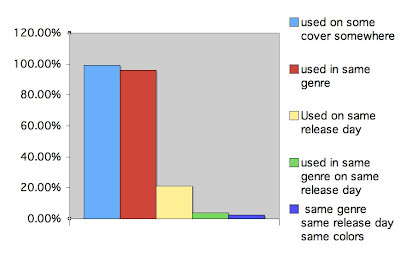 So, needless to say, I was totally mortified to learn all this. Mostly because of reader confusion. I don’t want readers trying to buy my book and getting Juliana’s, or vice versa. That’s bad for both of us, and for our readers. So I immediately went to work on thinking of what to do!!

My scientific decision-making process
on what to do about this cover problem!! 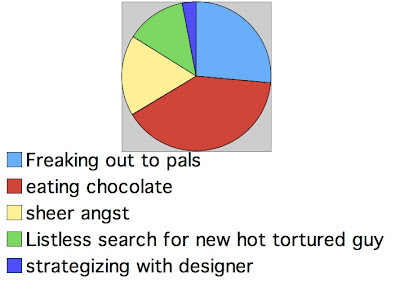 Anyway, designer extraordinaire Su and I talked about keeping angsty guy and just making the cover look radically different, and she mocked up a few ideas, like one with angsty guy in a field of electric blue with lightning, and one where he’s pulled way up to the front. But, none was as fabulous as her first one. This guy begs for a cover of angsty darkness.

In the end, I decided I needed a new model.  Juliana’s was out there first, and hey, I have no shortage of angsty, hot, tortured heroes coming up in the Code of Shadows series to use that photo for, but, just not on the same release day. I don’t want readers to be all WTF on release day.

I think it’s the right thing to do in this case, though I feel like a total freak for changing the cover around again. And, not to embarrass Su of Earthly Charms but she has been so amazing and nimble in getting all this handled. And responsive and talented and fabulous. And managed to whip out an amazing cover.

I’ll confess, I love this cover just a tiny bit more for this book, because I feel this model beautifully captures the tortured hotness of my hero, Paul, who is a fighter. Also, I love the big title, too, how it pops. And I feel like the layout looks fresh. And I swear to you, this really IS the last cover.  PLEASE! Let there be not clones to cause confusion. Pleeeeease!!! *klunk*

I am so grateful to everyone for all your support and all my pals who gave me advice, and retweeted my cover news....and I'm sorry to all bloggers who put up my cover and now have to change it. Okay. Deep breath!!

A lonely girl uses an occult computer program to bring a sexy spy from a TV ad to life. The actor/fighter who plays the character  - and has come to hate him – is not amused.

It comes out in print and ebook on October 30th. More info here.

Oh man, that blows. Yeah, I saw that Avon cover after I saw yours but didn't think to check the dates. Poor you, with so many covers! Glad you've got it worked out now.

This one's a great cover too! Besides, more than one cover change before publication isn't so unusual anymore. Lucky that you and your designer found another drool-worthy model!

Ha! I *love* the graphs. VERY scientific!! And the new new cover is fabulouso!

Funny: you describe the cover as Paul, the tortured hero, but in my head I keep seeing him as the spy who gets brought to life by the heroine's computer. I see him kind of looking at himself and having a bit of an existential crisis. What am I? Why am I here? But I'm totally speculating.

Love the cover. I think it captures the paranormal elements of the premise really well.

Amber: Thanks!! Yes, I think it worked out for the best.

Lillie! Hey you!! Yes, I'm so happy we found that guy.

Beth: LOL. lips zipped on those speculations! Thanks so much for dropping by!

Your graphs are hilarious! As funny as your drawings tend to be in some of your posts. You're too much Carolyn. I am very happy that you are happy with your cover. Your designer really does do good work. :)

*phew* changed my Saturday post just in time :D Carolyn, don't you dare to change this one for at least a week! I really like it!

This one rocks too! In fact, I like this one even better *g* And your graphs had me giggling! So glad everything is working out for the best with the new hawt cover ;)

I love it. Makes me even happier I swiped those secrets... Shiloh... Being incognito...because google is being a butt. Not cuz I'm in hiding.

Sorry to hear about the other cover and I will miss it a little bit but the new NEW cover will work just as fine.
So congrats on the cover and I'm looking forward to the book!

Katie: Yes, thanks, I do think so.

Evening: Thanks so much!!!

Carolyn, I loved your post and I LOVE your new cover. It's gorgeous, you're funny, nice and pretty.

You know, you're always free to ask me about other covers a stock model might have appeared on. :) I'll only tell you about where the new Mr Real cover guy's appeared if you ask.

Yay! Hi Juliana! You are awesome for being such a good sport...and nice and pretty too, and not at all evil, yet I will continue to refer to us as evil cover twins. Thanks for stopping by!

This proves everything happens for a reason! I love the newest cover best of all!

I think it's a blessing in disguise, because I really like the new one better. By a lot. Can't wait to read it.

Gah!!! I'm a little late coming to this post - I was off line most of the holiday weekend. What a wild thing to have happen. But I have to tell you how much I LOVE that you used a bar graph and pie chart to explain it all. You are speaking my enginerdy language! I love the cover and can't wait to read the book!

Some things really do work out for the best; I like the new cover much better!

Make Money Online is very easy now, In Internet system we have now best earning system without any work, Just Invest some Money into your Business and Make Perfect Life time Earnings with this Business.
Join Now for Make Perfect Business and Earn Money online from home.
www.hotfxearnings.com