It's so rewarding when you look at the way you were, say, two years ago, and see how far you have come!!

Mind Games, the first in my Disillusionists trilogy, came out in 2010.  OMG, I was obsessed with my Amazon rankings!  You can tell from this old post, below.

The Oddshots blog, where this originally appeared, is sadly now gone. So I'm reprising it here.

The Amazon sales ranking: An expose!

Before my book came out, I noticed that many other authors talk about the Amazon ranking, and how on release weeks, they would check it a lot to see where their book was. I was sure I would be different because:

1. I don’t tend to buy books from Amazon, and naturally, I assume most people behave as I do.
2. I’ve always heard those ranking don’t mean all that much.
3. I’m interested in whether people actually enjoy the book—not sales, or a silly number.

So! Mind Games was released last week, and what did debut author Carolyn Crane do? Check the Amazon rankings! 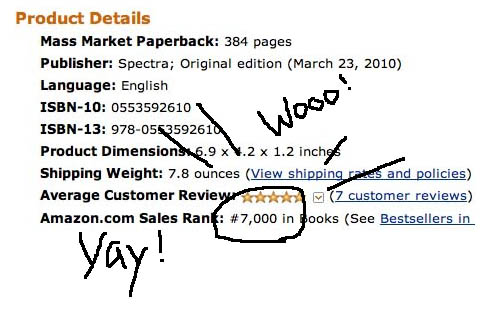 I started off not doing it much, but since other authors talk about it, I figured if they check it, there must be something to it. Because Carolyn Crane is all about the peer pressure. So I started checking it more and more. Also, maybe nobody knows what it means, but the little number kept changing! Something was happening. Somebody needed to monitor it. 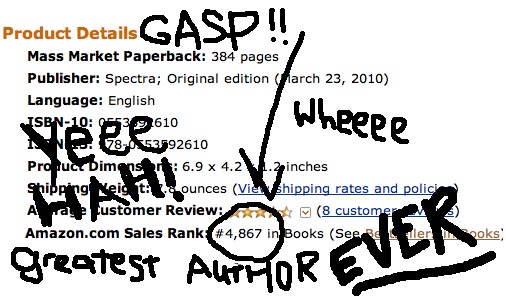 What is the number all about? I did some high level research.

I typed “how do Amazon rankings work” into Google and quickly discovered that the rumors are true: nobody outside Amazon really understands it. (Though some say it becomes more meaningful when you get around 1000, or into the best-seller territory of 100 or lower.) But nobody really knows what it’s based on. Sales are part of it, but there are other factors. What are these other factors you ask? 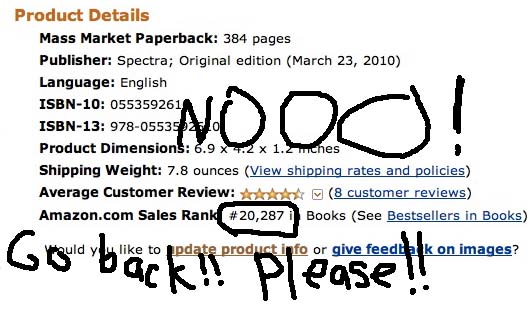 Nobody knows. Many people work hard to try to figure these other factors out. They write articles with phrases like: “the sales ranking has to be dissected dynamically” and “figures are applied to the algorithm during the calculation.”

Essentially, these people are reverse engineering the rankings, just the way scientists tried to reverse engineer Arnold Schwarzenegger in the time between Terminators #1 & #2. And we know how that ended. 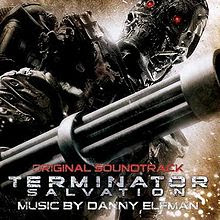 But, back to me. The thing is, these little numbers would change, and it became weirdly entrancing. Once, my number hit the 3,000s! I felt happy! Like the book was doing well! Other times, my number would backslide and I would be a sad bear.

In their FAQs, Amazon is suspiciously vague

Amazon says “the lower the number, the higher the sales” and that the rank “reflects recent and historical sales.” Which, if you sort of think about it, are somewhat contradictory. And why not just put a number that grows every time somebody buys a book? Like a fun little meter that says, hey! Another book was bought! No. Instead, they rank your book against ALL other books on the planet in the most mysterious way possible. As if authors aren’t insecure enough. 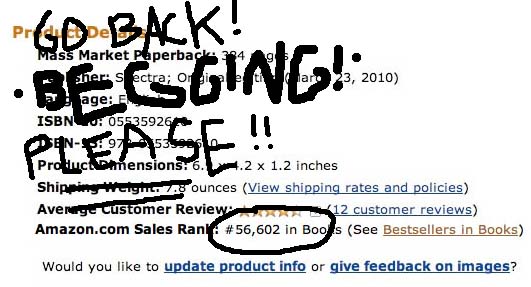 Clearly something is going on. It has all the hallmarks of an experiment— something akin to the Dharma Initiative on the TV show LOST! What is the purpose of Amazon’s Dharma Initiative-type ranking? How does it work? I have theories.

Theory #1: It is a sinister ego-crushing experiment
In this scenario, the number is based only vaguely on sales, but mostly on how many times an author checks the number.

As you may or may not know, one of the classic techniques of breaking down a person’s self esteem is to praise them lavishly (You’re 3,200!) and then withdraw that praise (248,560. Loser!) And then, when the author goes crawling back: (Hey! You’re okay! 11,350!). And the more you check it, the more it messes with your head. 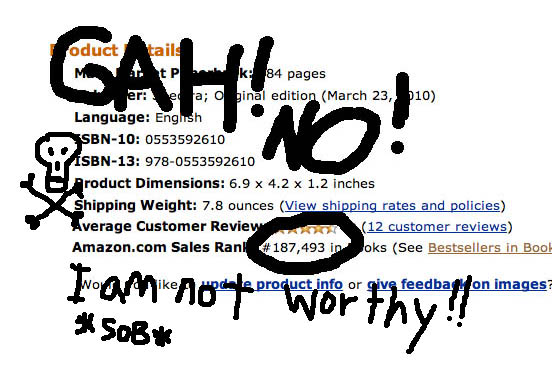 Theory #2: The ranking is simply a carrot and stick trick to drive author traffic
Maybe Amazon is simply interested in driving traffic. I mean, isn’t that what big websites ultimately want? Think about it: authors are huge purchasers of books; maybe the ranking number is calibrated to get authors to visit more. In this theory, Amazon creates a believable range upon your release, that is, they “seed” your book the way a sports team might be seeded, and then Amazon’s artificially intelligent system goes to work, learning what sort of fluctuation brings you back, and what sort of fluctuation disheartens you so much, you stop checking for a day, and it modulates until it has you checking at an optimal frequency. 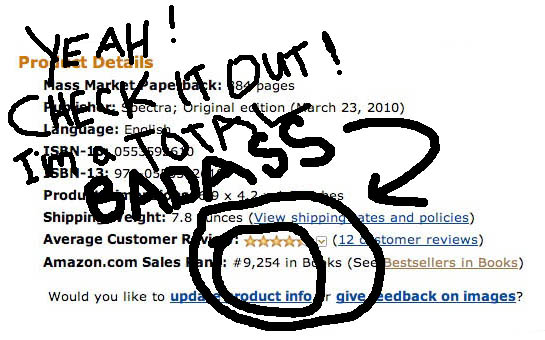 Theory #3: A funny joke for Amazon insiders
What if the number is way more random than anybody imagines? What if, inside Amazon’s headquarters, there is this giant monkey cage, and computer keyboards are positioned around the cage. And the monkeys are like, eeee eee ee! punching the keyboards, and everybody who walks by laughs, because they know that people write articles about the number, and authors check it incessantly, and it’s just monkeys playing! And it’s this thing that boosts employee morale. A joke they are all in on that creates togetherness. 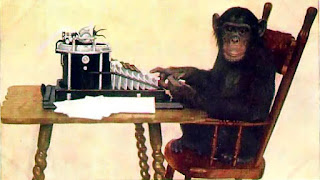 Oh, how sad to look back at those days when I was so hung up on a number to the  point of weaving paranoid theories about Amazon.

This kind of behavior appalls me now. It not what being a  true writer, a true artist, is all about! I'm glad I'm over it.

For example, my cross-genre PNR/spy/suspense romance, MR. REAL, just released this last week, and do I have it as an item on the toolbar? Actually, I don't have it on my toolbar!

I'll admit to checking  the Mr. Real Amazon page now and then, but it's simple curiosity. A few years has put everything in perspective. 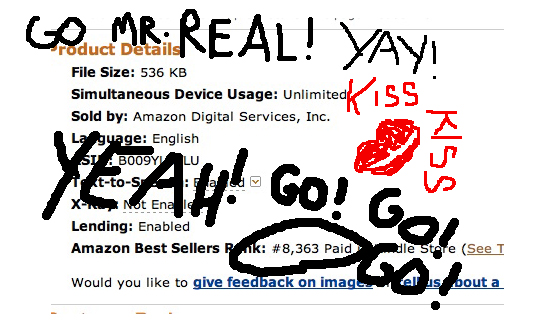 My other pen name, Annika Martin, writer of torrid bank robber erotica, recently got on a bestseller list as part of this 99-cent erotica bestsellers sale.

Did I freak out? No. A rank is just a number. It means nothing! Artistic quality is what should count. 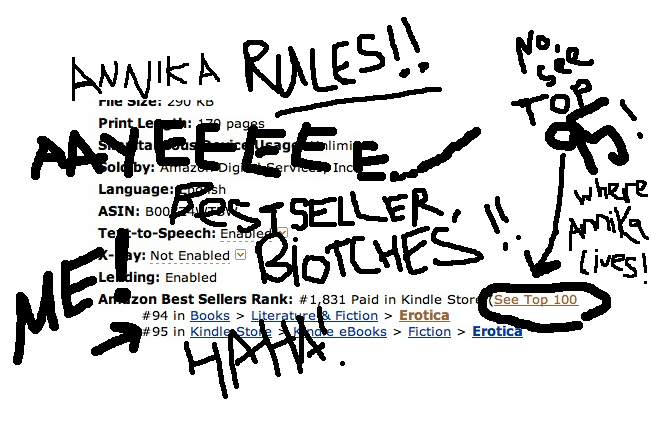 Not to boast, but I think these past two years have allowed me to grow as a person, and truly put things in perspective.

Hey! Thanks for visiting. If this post helps even one other writer see what a waste of time these obsessions with Amazon rank are, or gives them hope they they can change and get over their fixation on a number, I will rest easy tonight. Have a great week, people.

hahah Carolyn Crane... you are histerical. I had to come over here and tell you that even though I have not read your new book(hangs head in shame), you are a fabulous author despite any numbers or the name you are using. Keep doing what you do, writing fabulous books!

Hey Ellz!! Aw, thanks! You are awesome to come over and say that. Have a great week.

This had me laughing and reminding myself not to take those #s so damn seriously...but seriously... ROFL I never know! But this was fun.

This. Was. Awesome. :) LOL Thanks for the post and unveiling the mystery that is the Amazon ranking.

I just wet myself, and it wasn't just cus I'm old. LOLLOL! THAT was brilliant!

LOL, it was the "where Annika lives" that makes this.

I can't remember who it was, I think maybe the Novel Doctor guy, what's his name, but anyway he was like, if you knew for sure you'd never be a bestseller, or win an award, or anything big, would you still write? And at first I was like hey, that's brilliant. Make it about the writing and so on. But now, no. It's depressing, that's what it is. LOL.

Kacey: Hey, thanks! Yes, hard to resist them.

Rael: glad I could be of service!!

Skye: Oh, that quote is kind of scary.

I adore you, that's all.

Yeah. I don't ever check mine, I mean, monkeys. Right? Who cares.

*OMGERD, Amazon, you faithless tart, WHY WHY WHY*

I think it's all about the monkeys. Or cats. It could easily be cats.
My cat loves to type. He's also quite successful at it. Sent an email to my boss full of encoded messages, which of course, to anyone without the key would appear as gibberish. Got me called on the carpet for not properly virus-protecting my computer, and putting other people's systems at risk. Because that is of course the appropriate punishment for staring at that little screen, rather than paying full and total attention to the cat, where it obviously belongs.

Whoops, meant to include that it was cats punishing you for checking your amazon rankings, rather than petting them.
Definitely not dogs. Far too subtle for them. They just drool on the keyboard and fry the whole thing then and there. (Try explaining that one to AppleCare...)

Liz: A cat conspiracy! I love it. That could explain a great many things in my life!

maxgreat blog I've discovered the same thing about reviews. They sting less and less with each passing book. I'm convinced Amszon ranking is Amazon's way of effing with an author's mind lol

I almost spewed coffee everywhere...okay, maybe I did just a little. You are pure awesome :)

You made me laugh out loud. Too funny.

perhaps we could start an Authors Anonymous. I admit, I was in denial about those numbers...

And as if book rankings weren't enough of a mind f***, they had to add author rankings!