Kat Richardson's Scavenger Hunt starts today!!
A must-do for Harper Blaine/Greywalker fans in celebration of Richardson's sweet new site. HURRY! It's a time-based thing, but everyone wins something. Prizes include: books, a character named after you, art and more. Go here for more!! 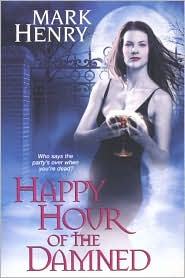 Happy Hour of the Damned by Mark Henry
Finally in mass market!! This is an intensely entertaining combination of gore, violence, and startling humor alongside surprising kindnesses and vivid characters.
Synopsis: Alive, ad exec Amanda Feral worked hard to wring enjoyment out of her days. Now that she's a zombie, it's a different story. Turns out, Seattle is home to glamorous undead of every description, and Amanda - stylish and impeccably groomed even in the afterlife - is swigging cocktails and living large (so to speak) among its elite. But there are downsides. Not being able to stomach anything except alcohol and human flesh, for instance. And the fact that someone is targeting Seattle's otherworldly inhabitants for their own sinister reasons. Preying on the undead is seriously uncool.
The only option is for Amanda and her zombie BFF Wendy and gorgeous gay vampire pal Gil to unearth the culprit among the legions of Seattle's bloodsuckers, shapeshifters, reapers, succubi, and demons - before they all meet a fate a lot worse than death...
Reviews: Mandi, The Book Smugglers
Personal Note: See my writeup on Road Trip here.
***Eligible for the Literary Escapism New Author mini-Challenge!! 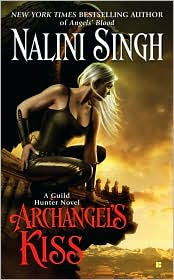 Archangel's Kiss by Nalini Singh
A new fave series for me! Just finished book #1, Angels' Blood. GASP.
Synopsis: Vampire hunter Elena Deveraux wakes from a year-long coma to find that she has become an angel-and that her lover, the stunningly dangerous archangel Raphael, likes having her under his control. But almost immediately, Raphael must ready Elena for a flight to Beijing, to attend a ball thrown by the archangel Lijuan. Ancient and without conscience, Lijuan's power lies with the dead. And she has organized the most perfect and most vicious of welcomes for Elena...
Reviewed: Book Binge, That's Queen Bitch to You, Book Smugglers, Babbling about Books
Personal note: Will be slobbering over book #1, Angels' Blood, later this week.
Accidentally Demonic by Dakota Cassidy
Book #1 recently landed in my TBR pile due to multiple recommendations on its fun, funny reputation. SO stoked! I love glomming a series when a few are out already, so I can just tear through all of them. 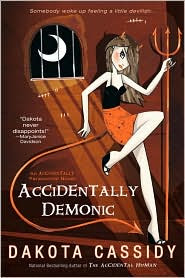 Synopsis: When mild-mannered Casey Schwartz wakes up in jail, she has no memory of how she got there. But after her sister, Wanda, bails her out, Casey has more to deal with than a foggy memory-like abrupt mood swings and fireballs shooting from her fingertips. But things really head south when a vampire shows up on her doorstep...

Vampire Clayton Gunnersson is seriously hot. And seriously taken-by a demon. In a ritual gone wrong, Clayton tried to get rid of his unwanted bond, but spilled some demonic blood on Casey, getting her possessed in the process. Now, Casey has to share her body and manage to keep her growing attraction to Clayton in check, because falling for her demon's boyfriend just might get Casey killed-from the inside out.
Reviewed: Bitten by Books, Wicked Lil Pixie,
****Eligible for Literary Escapism's new author mini challenge! 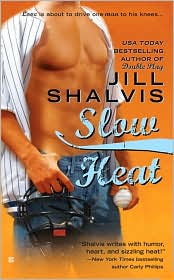 Synopsis: After a woman claims she’s pregnant with Wade O’Riley’s love child, Major League Baseball’s most celebrated catcher and ladies’ man is slapped on the wrist by management and ordered to improve his image. His enforcer is the team’s publicist, the tough and sexy Samantha McNead.

When Wade needs a date for a celebrity wedding, Sam steps up to the plate as his “girlfriend.” But given her secret crush on him and that one awkward night a year ago in a stuck elevator with too much scotch, the whole thing is an exercise in sexual tension.

Wade is thrilled when the pretense turns into an unexpected night of hot passion. But the next day Sam is back to her cool self. As a catcher, Wade’s used to giving the signals, not struggling to read them. Now, to win the love of his “pretend” girlfriend, he needs a homerun–even it involves
stealing a few bases… A Girl's Guide to Guns and Monsters
Brilliant, original sci-fi and fantasy stories featuring brave and bold heroines
With stories by: Lilith Saintcrow, Tanya Huff, Jeanne Stein, Anton Strout, Jim Hines and others!
Synopsis: Thirteen urban and paranormal tales of strong women, armed with weapons they are not afraid to use, as well as fists and feet of fury, who face monsters and bad guys-and are not above rescuing men in the process.
Reviewed by The Edge,
Personal Note: Psyched!
**** eligible for Literary Escapism's new author challenge! (has Anton Strout and Jeanne Stein.)
My trip to Mexico
Starting Friday, I will be in Mexico with my mom and two sisters. In Tulum, which is near Cancun. I'm really looking forward to it. Mr. Crane is jealous, but this is a girls only thing, and especially nice for my mom--we lost dad in 2008, and it hasn't been easy for her.
If the wireless is working, I'll post blow-by-blow reports of lounging, mindless chatter, sisterly power struggles, beach-related body image issues...wait maybe I won't give reports. LOL. No, I will...if I'm in the mood. I swear, in the last 10 days every client has come out of the woodwork with a rush job. I need to relax! So, hmmm, perhaps they will just be photos of food, and views of my toes over the top of a book.
Posted by Carolyn Crane at 11:31 AM

I hadn't heard about The Girl's Guide... heh!

SO jealous of your trip to the warm sunny place. *sigh*

I can't wait to get started on Nalini's new book as well, I had to go to ridiculous lengths to get it.

Had to get a nice American friend to buy it via my account using her paypal cause it's registered in USA.

I only just heard about Girls' guide. It looks good.

Sayuri: You are a true fan to go to lengths. How frustrating, tho, to have to! Palaver. LOL. Nice word.

My copy of Slow Heat should be waiting for me when I get home. Woohoo!

Have a fantastic time in Mexico! Good luck with the sister thing *g*. I'm tasking a cruise w/my sister later this month. I admit to being a little scared...

Thanks for the post. I am participating in the Mini Challenge. I read Molly Harper so far. I am hoping to get to Mark Henry, Dakota, Rvincent, Kat and you (depending if the arc comes in time). Have a great time.
Elie (Ellz Readz)

Carolyn, have a rip-roaring good time in Mexico! Sounds wonderful!

Thanks for the link back & don't forget Girl's Guide counts for the challenge too..Anton has a short story in it!

Have a fabulous time in Mexico! *so jealous*

I am thrilled I have Jill's book. Feels like I've been waiting forever.

Lori: The sister trip is a total double edged sword. Good, yet risky.

Ellz: I totally need to get on Harper!!

Natasha: I noticed Jeanne Stein does, too. It seems like it should count. I put a thing up that I believe it does. I should ask Jackie!

Stacy: You already finished it!!!

Thanks for the synopses and updates. Man, I love Harper Blaine, in fact I have all the books but the first one in hardcover - and that is a very unusual occurrence!! lol

You have an awesome time in Mexico!! I feel for your family, my father passed away in early 2008 and my mother has also had a difficult time. She is sick right now and I left work to go to her today. Anyway, I don't mind saying "bone tired" here... I think she is getting better. Can't afford to take her south though!!

Listen, you enjoy your girl vacation!!

Hope you, sisters and your mom all have a fun and relaxing time in Mexico.

I still need to read Richarson's series. The zombies I'll have to pass on. :)

I got Slow Heat on Sunday. Finished it yesterday - Very good!

I've been to Tulum. So fab! Maybe my favorite place in Mexico. I'm jealous!!

Have a great time in Mexico! My brother's fiance is from Mexico so we're going in June when they get married - I can't wait!

Thanks for checking for me Carolyn! And I totally didn't realize Jeanne Stein's in there too! I think I'm going to be going over the 5 books, I'm already done two >.< lol

Have a great time in Mexico with your family - it sounds like so much fun!

I need to get Happy Hour of the Damned - your little blurb has be all a twitter. :)

Oh yes Caroline, go have fun at the beach! Mr. Crane will just have to well.. adjust, lol!