A little update on In Too Deep 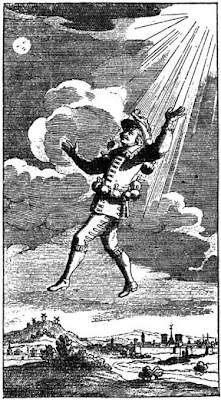 Continuing to hugely enjoy In Too Deep. It isn't going exactly where I thought it would, and I always love when a book does that. (Yesterday I was focusing mostly on the fun of the anonymous dirty letters put in the library suggestion box.)

Not to spoil anything, but I will say this much: that there's this absolutely wonderful dynamic between librarian Gwendolynne and handsome, unassuming Professor Brewster where they have these odd little exchanges about the letters and letter writer (who calls himself Nemesis). Gwendolynne sometimes suspects Brewster is her letter writer, but sometimes she thinks not!

At one point Professor Brewster goes, "We barely know each other, yet we're talking about sex. And somehow we seem to be involved in what amounts to a menage a trois. [with the letter writer!] It's most perplexing."

And of course, now it's not at all creepy or stalkery. It is, however, an entertainingly inventive scenario. Okay, I'm only a third of the way through but I might not report anymore because I know I will want to spoil things!!  Excerpt here.
Posted by Carolyn Crane at 9:23 AM

Email ThisBlogThis!Share to TwitterShare to FacebookShare to Pinterest
Labels: In Too Deep, Portia Da Costa

So glad you're enjoying Professor Hottie! He was total fun and self indulgence to write... :)

I can tell you had lots of fun writing him!!

CJ, you've got me wanting this book bad! I've never read anything by Ms. Da Costa so this one will be my first.

Thanks for the nightly updates - love those :)

Hey Leslie: I'll be interested to see what you think!

I've had The Tutor on my TBB list for a while, it seems like I'll have to add In Too Deep, now!

OK, so I just hopped over to the author site, and read an excerpt of In Too Deep. Lordy! ::fans self:: This is going on my list for purchase on payday!

CJ, you've got me wanting this book bad!

Thank you so much CJ for the updates. I feel like I'm reading vicariously through you :) (That may not have come out quite right...)

Sounds so good! I need to buy this!