Is there a bad Megan Hart Spice book? No, don't answer that--I won't believe it if you say there is!  I am devouring Stranger right now. The basic plot is simple: Grace, the heroine, pays male prostitutes to pick her up in bars or come to hotel rooms and enact little fantasy scenarios she cooks up. She's a funeral director with issues.

I'm trying to think of my favorite scenario so far for this post...I loved them all, but I guess it comes down to either this one about the pizza delivery guy, and the stranger in the bar. 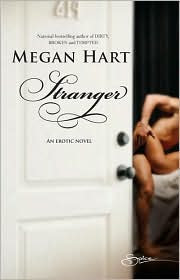 Yes, after much deliberation, I have decided I like the pizza delivery one best so far. He comes to her hotel room with the pizza and demands that she pay up. But I don't have any money! she protests. Then I guess we'll have to think of something else, he says.


"If you think--" I started, intending but unable to sound angry. My voice shook just a little, and I had to stop to swallow against my dry throat.

"Turn around. Put your hands on the table."

I did, one on each side of the pizza box, still warm and smelling of cheese and sauce. I didn't dare turn, not even to glance over my shoulder. I closed my eyes so I didn't have to watch my fingers clutch against the sleek laminate of the hotel table, and I waited, every muscle tense and atremble, for him to touch me.

He didn't. Not as soon as I'd thought he would, and the waiting became torture.

I sometimes think Megan Hart's special genius is in hooking into female fantasies in a precise and honest way. But it's also in getting the little details right that make it all feel very real life. Like the laminate table and the smell of pizza. Or afterwards, she and this rentboy, as she calls them, Jack, laugh about his having borrowed the delivery uniform from his friend and how mad this friend would be if he knew how Jack used it. And she compliments him on the nice touch of actually bringing the pizza. And then they eat it.

I also totally enjoyed realizing who Jack is from Dirty, and the reappearance of other characters from that book, and frankly, the fact that the heroine has sex with other guys even after she meets the hero. I never really liked that rule. But I sure like this book!
Posted by Carolyn Crane at 9:17 AM

I have this book, which I bought because it had been so universally well reviewed around the internet. I started it not too long ago, and put it down because it made me feel kind of squirmy inside (not in a good way). I figure I'll go back to it at some point, but the premise just seemed so...unsafe to me. In a scary way that made me really uncomfortable.

Kati, Have I told you I love your new avatar? On the book, well, that is so interesting you have this take. With such a high level of realism, I suppose if it doesn't work for you, it really won't. I'd be curious how far you read.

CJ - It's a Windflower Fairy, which I thought was particularly apt. :wink:

Yeah, I think it might be the realism of the story. I'm not sure. But I remember having the same feeling reading it that I do when I'm watching TV and I see something that I know is going to end badly, you know? It's like butterflies in my stomach. Which, I think is probably what she's going for, you know? But I'm just not sure I can take it.

I'll probably try again, but not soon, I don't think.

Umm so I have a confession to make. I've never read this author... ever and yet everyone swears I need to... crap

I've only read her book Tempted. I hope to pick up some of her others someday though!

I've only read Broken but loved Hart's writing style. Dirty is in my TBR - I'll get to it...eventually.

Sarai, I haven't read any of Megan Hart's books either, but Dirty is on my TBR list!

I hear such wonderful things about her books. I even HAVE 3 of her books including Stranger. I simply have to stop buying and start reading!!

I have this book in my TBR Carolyn Jean. I've read really great things about it.

I'm going to have to get to it soon.

I just finished Taking Care Of Business written by Lauren Dane and Megan Hart. It was good. I quite liked Megan Hart's voice.

I really need to get to this one. It's in my TBR pile for a few weeks now. Don't know why because I really liked all the other novels by Hart I've read. Oh, and I want to read the Raybourn one as well, of course. LOL

I haven'tr ead any of her books, but I have a strong feeling I would share Kati's reaction to this one.

I tried one of her first books, and had the same reaction as Kati, there was a realism there, a rawness, that just made me uncomfortable and sad. I think she has phenomenal talent, but I also think she's not the author for me. Even though, when I read reviews like this I'm *almost* tempted to try her again.

I LOVED this book! I agree with you about the rule of the h or h having sex with someone other than the h or h, but in the case of this book, it totally worked for me. I loved the idea that Grace's and Sam's relationship was not formed and based around sex. I was drawn in to Grace's life from the beginning. For me, it all seemed simplistic, as you said, but before I knew it I was so caught up in her life emotionally...Megan Hart did an amazing job. It's the only Spice book of hers I've read, but I plan on reading the others.

I LOVE Megan Hart's work. It's honest story telling. Sometimes it reveals the brutal truth about men and women and their complex relationships... things not always easy to digest as a lover of romance. But she [Hart] ALWAYS makes it work.

I love so many scenes in this book... but the first one between Grace and Sam is really great. I think that may even be the first chapter? LOL.

Another Megan Hart fan here. Loved Stranger. Having the heroine as a funeral director, very different but it worked.

And yes, the pizza delivery scenario was great. ;)

I think one of the things I like so much about her books is that the plots are so different from what's out there.

A funeral director with issues?? I am intrigued!