My semi-doomed battles, and one winning one

Okay, first, WOW! I wanted to capture the wonder that is the BWAHA current standings because I so rarely win at these things. I inherited my Dad's gene of being unlucky in gambling, but look!! I am #2 at the moment!!

I don't really understand all the numbers and things, and I don't think it's entirely likely that Iron Kissed will kick ass on all the other books, but I am basking in the glory of right now. 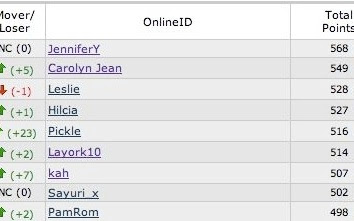 Who is this Jennifer Y? I really can't fault her for picking Spymaster's Lady.
All these other people picked Blue Eyed Devil.
Oh, my Iron Kissed has some fierce competition!
Battlefront #2: words per day
In a land of 3000 word-a-day, even 5000 word-a-day writers, not only am I lucky to do 1000 words in a day, but I write longhand, so I have to type those words in later on.

I made a fleeting breakthrough this past summer/fall where I actually typed big chunks of a first draft onto the computer--the speed was dizzying! I was happy. Finally I was like the other writers. Now I'm on a new novel that's not coming as easy, and I have regressed. I'm back in my chair with a notebook.

Battlefront #3: my pathetic Led Zeppelin OCD
Along with being back in my chair with my notebook, my OCD thing is back where, at the beginning of my writing time, I have to listen to this one Led Zeppelin compilation that contains, among other songs, Kashmir, No Quarter and When the Levee Breaks. There are other songs on it, but those are the key songs I have to hear. 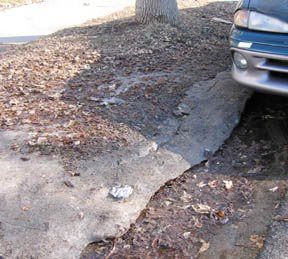 It's not as if I especially like those songs. They're barely even songs to me anymore; they're compulsions. Like a slave I grab my pen and hit play.
Suffice it to say, the presence of longhand and Led Zeppelin are not positive indicators for the writing front. Nevertheless, I slog on.

Battlefront #4: snowcrusts
Okay, you are OUT OF HERE, snowcrusts. This is one battle that I, and all of Minneapolis, is currently winning.

Snowcrusts, you contain sand from winter plowing, and have leaves and things stuck onto you that help you stay cooler than the air and let you hang on even when it's like 40 or 50 degrees, but you are fighting a losing battle.

Look at you! You are not even touching the road anymore. Today is the day. I may not win BWAHA, I may not get off the Led Zeppelin or the longhand thing, but by God, at least the snowcrusts of Minneapolis will be gone soon!
Posted by Carolyn Crane at 3:33 PM

I am in AWE of your mad Dabwahaha skilz. I'm number 315 or some CRAP. How could Mexican Heat and Demon Bound NOT have advanced ONCE.

I had that Led Zeppelin thing for Happy Endings: but with Brandon YUMMY YUM YUM Boyd of Incubus. I had to hear Love Hurts, Dig, and Oil & Water. It's a writers thing. Keep slogging, Cee Jay. You'll get there!!!

1000 words? FAIL. I took a week off and that turned into two weeks. SHEET.

We should do a longdistance lunch.

But well done you.

The longhand thing. And I have to use a fountain pen which just means I have regular annoying spats as I change cartridges. And blue ink.

Oops. I am sounding weird.

LBG: I picked both those, too. I was particularly surprised D Bound didn't progress. Oh,no, two weeks off! We'll have to do LD lunch, dude.

KB: I never read it either! But I like the way you think, little missy.

Tumperkin! Did I even know you did longhand in a fountain pen? I just love that. I am glad!!

My husband does with a fountain pen, too. Bridget Locke does longhand, too, but I don't know anybody else who does besides us three.

I used to write long hand, then found my laptop. can type faster than writing.

KB: I can type faster, too, but the problem is thinking. I can't think as well at the keyboard as I can with a notebook.

The highest I got in DABWAHA was 20th. Now I'm tied for 76th. But since I certainly never expected to win, I've had fun playing. I do marvel at your mad prognosticating skilz. And I'm rooting for you CJ. I can just imagine the picture of you with a gorgeous Sony Reader in your hand. Bliss!

Thanks Kati!! nobody's more shocked than I am. Oh, you can't IMAGINE how I want that Sony Reader, either.

You are very awesome in the DBWAHA standings! I've been keeping my eye on you. I think I'm in 100th place.

I can't write more than 1,000 words a day, either. A lot of my process is just thinking, which I don't do well sitting down in front of the computer. I often write the first draft of a scene longhand, too.

I do all my planning longhand. In notebooks.

And Blue-Eyed Devil for the win! C'mon! It's Lisa Kleypas!

Jill, That makes me feel SO much better! That sounds almost exactly like my process. It feels slow, doesn't it? But look at you!

LB: VOTE NO on Blue Eyed devil. Do you not have a care for your pal Carolyn Jean? Blue Eyed Devil must not win.

So much for saving the contemporary!!

Apparently the contemporary is alive and well and poised to screw me out of a Sony ereader!

Yeah, that's me at #3 and I have no idea how I got there. Still don't understand why peeps with higher % are lower.

Zeppelin, Pearl Jam and Boston are the ones I get stuck on, listening over and over.

Wishing you warm weather - I'll send some of mine your way. :)

Leslie! Aha! That is YOU!!! Blue-eyed Devil, huh? Well, we are in a very exclusive club, aren't we? How did we get here? Oh, I like your other musical choices. You are a girl after my own heart.

Marg: Thanks! Good luck to you - you never know what might happen....sort of.

I'm also in complete awe of your DA BWAHA selections...I'm too scared to see where I am in the second chance pool...

*sneaks off to have a look*

And all the best with the writing. I'm guessing like most things, it has its ups and downs. I find, the harder you try, the less you write. Good luck!

I'll answer you're "Who is this Jennifer Y.?" question...it's me...a reader/blogger who just happened to get really lucky with her selections in the tournament...LOL.

Good luck in the tourney. I am actually really shocked that I am doing so well.

Katiebabs said that "Jen Y has the force on her side" and she called me Darth Vader earlier on Twitter...hmmm....

Even if I don't win, something good came out of it...I met some fellow readers and discovered some new blogs to visit...LOL

Best of luck on all your battles!

Orianna: I don't even know where you follow the second chance pool. Who is winning on that? I should check!

JenniferY: I agree, it's really fun meeting new people like this and new blogs like yours. Also, I meant it about Spymaster -it is one of my fave books of all time, so I'll be sort of glad if it wins. I haven't even read Iron Kissed, my pick for the win!