Great moments: Men of the Otherworld Bitten by Kelley Armstrong was my first urban fantasy read, and it remains one of my faves. It came to me in a roundabout way some six or seven years ago; I was at a writer friend's home, about to take an 8-hour train ride later that day, and had nothing to read, so she pulled a hardcover off her shelf--a novel she'd been sent to review.

It had completely different cover art than it has now (pictured right). It looked and felt like a literary novel. At the time, urban fantasy wasn't really a category, I think, so maybe that's how it was being sold.

I'll never forget how she described it: "It's about yuppies who turn into werewolves at night." I thought that sounded weird and interesting--I imagined something like Fight Club, and I took the book. Looking back, I think she didn't really read it. But I did, and I was hooked! It had super hot sexy scenes, paranormal creatures, exciting struggles. Way more fun than the stuff I was used to! 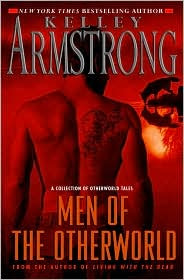 Last night I was feeling a little slumpy in my reading; I probably picked up three different books, but no, no and no. And then I spied Kelley Armstrong's Men of the Otherworld anthology by my bed, which was one of my fave reads of last year, and a total must-read for fans of Bitten, Stolen and the rest. It's two novellas centering on Jeremy and Clay, and two shorts that relate to Jeremy's parentage. Anyway, I just had to revisit some of the Clay and Jeremy stuff from the novella entitled Savage.

Armstrong usually does female narrators, but she gives Clay such a great voice here. In the early sections we learn about how he ended up a feral werewolf, alone in the bayou, and how Jeremy found him and worked tirelessly to bring him back into the world of humans.

This is a tale of small victories, and I just so love it. The interactions between these two are engaging and realistic, and they add wonderful dimension to these characters. A favorite moment: after days and weeks of patiently feeding Clay in the wilderness and finally getting him to put on clothes, Jeremy gets Clay to follow him to a motel, but of course Clay gets spooked at the motel room door and runs away to sleep under some nearby bushes, then:

Later that night, I woke up shivering. Louisiana was suffering through a cold snap that winter and even the clothing the man had provided didn't help much, I remembered that burst of heat from the motel room.

For a long time, I lay there, shivering, fear warring with discomfort. Finally I leapt up and dashed for the motel. The door was still open. Inside,the man was asleep on the bed. I curled up in the doorway and went to sleep.

And so I let myself be domesticated. In the end, like any stray, I was conquered by the promise of continued food and shelter. Trust would take longer.

For at least a week I slept in the doorway, not letting him close the door no matter who cold the night got. One day, another man came by. While I hid in the bushes outside,the other man yelled at my man, motioning at the door. Money changed hands and the other man left. That was the first of many such exchanged I'd see in my life--cash buying tolerance for my idiosyncrasies.

After a few days, with the right amount of food for coaxing, the man convinced me to come inside the room. He left the door open, so this seemed safe.

Armstrong's sensibility about the animal side of werewolves is one of the things that has always stood out for me in her werewolf tales; I always say, this is somebody who must spend a lot of time watching dogs, thinking about dogs.

I also love the voice here: smart but spare. I don't get into novellas much, and I don't do a whole lot of rereading, but as usual, I break the rules when it comes to Kelley Armstrong: the Clay and Jeremy stuff is so satisfying!
Posted by Carolyn Crane at 9:36 AM

I'm still blinking at your friend's summary of the book. WTF?!

I know, isn't that funny?

Yuppies who turn into werewolves at night? Huh.

This is one of my favorite series (at least the Clay and Elena stories) and I enjoyed this book very much - it was like an extra "peek" into their world.

I do love Elena and Clay :=)
Funny, Bitten was my first UF too, the book that made me read UF and Paranormal romance.

Yuppies who turn into werewolves???? Is she insane?

A friend got me hooked on Kelley's books and I just love her otherworld series.

Awesome series, I was lent bitten by a friend and that was me hooked on Armstrong and Urban Fantasy.

BLDD: Bitten was a lot of people's first. I wonder if it's because it was pubbed so early, or just because it's so good.

Dawn: LOL. I know. I should give my friend some crap about that descrip!!!

Haglerat: Another one! I wonder how many people started on this book!

*amazed at summary of Bitten*
I remember stumbling across that book by chance at my library. I saw werewolf, plopped down and started reading it.

If I remember correctly, fantasy in that aspect wasn't that popular at least in the area I was from. I absolutely adore Elena and Clay. Ooh, have you read Armstron's YA series?

Nath got me a copy of this book signed by the author. I haven't read it yet. But yeah, Bitten was so good, I don't blame you for going back to reread KA.

Oh, you know how much love I have for the series, and MotO in particular. I love Clay's voice in the book, and especially in Savage. I've both read the book and listened to the audiobook. I've actually never read Bitten. I originally found KA's site and read the free fiction she had posted. From there, I borrowed the Bitten audiobook (in cassette!) from the library and could not stop listening to it.

Reading your post makes me want to listen to MotO and Bitten again!

scape: No I haven't read her YA. I don't read much YA, but maybe I'll make yet another exception for KA.

Ames: you are in for SUCH a treat!!

Renee: I didn't realize you came to KA's stuff through a free read. I think I was remiss in this post by not thanking you for suggesting this book to me! Thanks.

You are entirely welcome! :-)

Oh! I forgot to mention, I did go out and buy my own digital audiobook of Bitten, and the beautiful, wonderful Nath brought me a signed copy when she visited this summer (1 of my 2 most treasured books!)

I'm a total sucker for a free read!

Kelley Armstrong is one of my favourite authors now. Just love how easy she is to read, how she has set her world up with definite world building rules but it is sufficiently broad so that it doesnt ever feel like has no where left to go.

I just read this a couple of weeks ago, and thought that part of the reason it was so good was that the stories didn't feel disconnected at all. It was almost like reading a novel rather than a collection of short stories. And I loved seeing Jeremy and Clay's background, and especially loved reading about Jeremy's parentage. Opens up a whole new avenue of stories for the future!

This book was absolutely amazing! I am not really a fan of anthologies, but this book blew me out of the water. I can't wait for the release of her other anthology featuring the story of how Clay and Elena met. That should be good.

Oh this sounds so very appealing. I nearly picked up Bitten in a shop a few months ago and didn't. I shall rectify the error now.