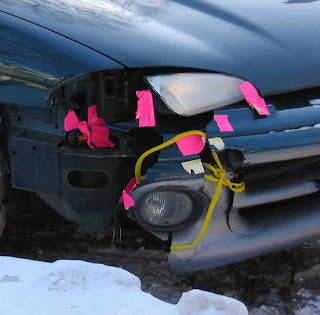 Look at our poor baby! Our 1994 Dodge Intrepid, aka The Millennium Falcon.
This is the result of two ice-sliding accidents in the past week. Nobody was hurt - these were like, 5 mph accidents with Mr. Crane behind the wheel.
Mr. Crane is an excellent driver, but he is also an expert on city shortcuts, with a great fondness for little side streets. Unfortunately, the little side streets of Minneapolis are icier than anyone can remember. In fact, some are like ice skating rinks with grooves in them, and some of the grooves take cars to the side.
Into parked cars. 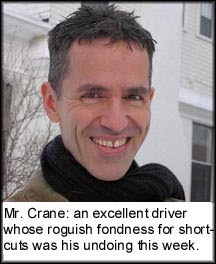 So he comes home very upset and tells me about the first smash-up. We attempted to repair the damage (do you like the pink duct tape?).
Then, a day later we're on our way to a friend's place, via a little side street, and I had just gotten done suggesting we take a better-de-iced main road and he was like, naah, we're fine, but he slowed to humor me. And then the next block, thunk. It was like this invisible force just slid us into a parked car!
So we got out to leave a note, and two neighbors came out to say that each of their cars had also been hit that week in the very same way, and they got notes, too. Obviously this all sucks very much on the financial front.
Luckily, the second car wasn't very damaged, but our duct tape and rope fix deteriorated to the point where the rope, as you see, is decorative at best. So it's going into the shop tomorrow.
Posted by Carolyn Crane at 10:45 AM

Email ThisBlogThis!Share to TwitterShare to FacebookShare to Pinterest
Labels: life

Loving the pink duct tape! Sliding on ice not so much. I think it's rather common place for us Northerner's though. (Hugs)Indigo

Oh man!! this time of year is awful for driving, I swear.

The pink duct tape is awesome! Glad you're both okay, evil black ice!

Ouch. Poor Intrepid. Thank goodness it wasn't more serious. I bet the dent to your wallet will be bigger than the dent to the car.

Love the pink duct tape, though! :)

Chris: LOL. We just laughed when we did it.

Indigo: Thanks!!! Yes - sounds like you know all about it!

Christine: Yes, there will be wallet dentage!!

Well... I have to say that I have not seen pink duct tape before. I now have a new mission in life... find pink duct tape. Down in the south... anything can be fixed with duct tape, lol!! Either gray or camoflouge!! LOL!
I am glad though that no one was hurt!
Hope the rest of your journey's are safe!

Awww, this makes me miss my 1989 Pontiac Sunbird whose side mirror was held on with duct tape. *sniffle*

Cecile: Thanks! I don't even know how we wound up with pink duct tape.

JenB: Yes, this incident was an excellent object lesson in the area of: Carolyn is always right.

Glad neither of the fender benders were very serious and no one was hurt. And kudos on the artsy patch job on the fender!

i'm still laughing about the picture of the car-love the pink duct tape and the rope!!!! i remember those icy grooves on the side streets-walking on them was a pain in the ass can't imagine driving on them.
bummer about the finances though!!

i'm still laughing about the picture of the car-love the pink duct tape and the rope!!!! i remember those icy grooves on the side streets-walking on them was a pain in the ass can't imagine driving on them.
bummer about the finances though!!

Never seen pink duct tape before LOL. I can't even imagine what it's like to drive in a place where there is ice. Where I live it's a rare winter day that you even need a jumper, unless it's windy of course. I live in Queensland, Australia!

Good to hear no one was hurt!

If someone were to ask me if I knew anyone with pink duct tape - yeah, your name would definitely come up. LOL

I thought that particular shade of scalding pink was familiar! My hubby gifted me with a lovely roll of it last year at Christmas. I do believe that it is much duck-ier than the usual silver and I am overjoyed to see it be used in such a public manner!

Also, very happy to heat that only vehicles were injured. Long live the hardy adventurous northerner!

Donna: It looks verry bright on the road. LOL.

Wooly: Right, you don't have to deal with that anymore.

I am so glad I don't live in snow country. I'd be hitting cars left and right probably.

unrelated note here - I received your first newsletter tonight, then read the first chapter of Mind Games. It's drawing me in! I like Justine's hypochondry (real word?). I can just imagine thinking you're coming down with everything you learn about, in fact, the worst things you find out about. I'm interested to see how this works throughout your novel.

Oh, bummer. Though I do like the pink tape. it would be awesome if you got the car painted that color. It's at the shop anyway. Why not?

Glad no one was injured.

At least you and the hubster are OK... everything else is secondary...

P.S. I thought they only made bondage tape in pnk...

Mardel: Hey, thanks for dropping in, and for the kind words!

Carolyn: OMG, it would be more than awesome to have that be pink all over.

I made my guy read your post to remember why he's glad he doesn't live in VT anymore. (We're wimpy So Cal kids, here.)

Good luck with the estimate, tomorrow!

Renee: Glad to be of service! LOL

Ouch! I hope the estimate isn't too much.

I do have to say..that pink duct tape is kind of awesome. (Please don't tell the Devil Woman I said so)

Slick car. I bet you really cramp Mr Crane's style when you insist on joining him to cruise the side streets in that baby.

So sorry about the accident prone intrepid. But the pink duct is certainly a fashion statement! Don't you love Midwestern winters?