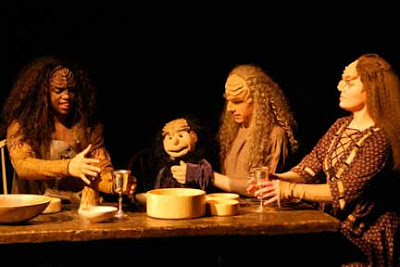 #2 Mr. Crane and I went to A Klingon Christmas Carol and it was so fabulous! It's an adaptation of the Dickens take done entirely in tlhIngan Hol (the Klingon Language) with English supertitles - a "classic tale of ghosts and redemption was adapted to reflect the Warrior Code of Honor."
I was really impressed by how the Dickens tale translates to another culture, and works across values. The play was funny and touching, and super clever with the trekkie references and diction - full of just the kinds of stuff Klingons would say, and it didn't take itself too seriously. The Klingons were fab actors, and there was a wonderful Vulcan narrator (who incidentally, made me realize that Obama is a bit Vulcan-like, and I mean that in the best way). And, in parts the play was totally touching; in fact, a tear came to my eye when the ghost of Christmas future showed little Tim Tom's grieving mother holding his little battle weapon. Actually, I'm not being funny. Read more on my post here. Photo courtesy of Commedia Beauregard.
#3 My website is done! Well, actually, I'm still tweaking and adding to it - every day I think of three new things to do to it. But that will probably be the case until a sunspot lays waste to the electrical power grid or whatever it is that's supposed to happen. It's done enough. www.authorcarolyncrane.com
Posted by Carolyn Crane at 9:27 PM

yay, congratulations on your website! i love the backstory on how you thought of "disillusionists" and snarfed out loud at your analogy to the non-ironic "Isn't it Ironic" song, haha.

I really like your new web site, it's so easy to navigate. And I like the colors too.

So...you created the term eye candy. I need to remember that tidbit. ;)

Haha I so want to see that play.

And the new site looks great

Congratulations on the website. I'm loving the Mind Games ramdom quotes, my favs so far:

“People want beautiful view out their window. Pfft. I say, do not give me lies.”
— Shelby; disillusionist power: grimness

“Don’t let those foppish outfits fool you. He dresses like a poodle, but he attacks like a pit bull.”
— Mutant Mastermind Sterling Packard

I'm still jealous that you got to see the Klingon Christmas Carol. ;P

Lusty: LOL. I was wondering if anybody would be familiar with that whole thing with that song.

Donna: Well, I believe I created it. Five other people could believe the same thing.

BLdd Hil: The play was SO charming!

Klingon Christmas. Love it.
Big Congrats on your site. It looks great!

Congrats Hilcia! Santa Bag will be coming soon! Thanks again, Carolyn, for the fun interview. Your new website is smoking.

Your new site is awesome Carolyn - congrats to you.. ;)

Congratulations on the website hon. It looks awesome! (Hugs)Indigo

Love the website and can't wait for an excerpt!

Your website is lovely - love the sepia/red/black. Very aesthetically pleasing..

The Klingon Christmas Carol sounds like such fun. I was a fan of TNG and Worf. :)

The website is great! And you're on a panel at RT. How cool is that. And after reading the bio I'm wondering if we were high school rivals. I went to Libertyville High School.

Thanks, guys on the site! It has been the source of much angst.

Leslie: Oh, funny! Well, I moved from Lombard in grade school, so we would've played you if grade schools had sports. You dog! You're in AZ now!!

CJ - I love the website! The premise for your book sounds very good. *makes note to suggest (firmly) book to library*

And I was squeeing over the author quotes! WOW! Congrats!