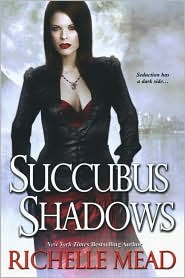 The one everybody has been waiting for, where Succubus Georgina has to plan Seth's wedding! Nooo! Because it's Seth, the man she desperately loves, but can never have him because she would destroy him, being that she is a Succubus. I have some theories about this one. Verra excited. 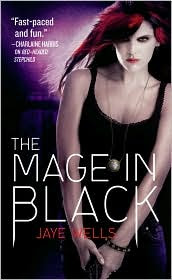 The Mage in Black by Jaye Wells
People are totally raving already about the thrillingness quotient of The Mage in Black, where Sabina winds up in New York's black light district and gets entangled in Mage politics...and her grandmother tries to kill her! And not with rich home baked pastries, either.
Nicole Peeler
Today, Nicole Peeler is launching her pre-pre-pre-launch of Tracking the Tempest with a vlog reading! See her hairstyle morph and inspect her decor skills while you hear what everyone's fave Selkie is up to next. Check it out!
Posted by Carolyn Crane at 9:20 AM

Damn, I must be a Georgina book behind... Eep!

OMG - I love/hate Georgina! She gets me all twisted up inside.

Just ordered SS today (It was almost $5 cheaper online than in the store!?!) - I've been avoiding reviews b/c I don't want to know ANYTHING in advance!

Patti - I'm totally with you on that! But I wanna save up for the audiobook version.... :D

Chris: I think I'm one behind, too, actually.

SVZ: This is quite the lovers' obstacle!!

Patti: Good policy! I'll look forward to see what you say about it!!

I read Succubus Shadows last weekend and loved it. It's a great series even though I must confess I do not like Seth.

Would a vlog be a video blog?