Geographical and cultural references that delighted me last night

I just started this book, and I'm already enjoying the hell out of it. One thing--and this is actually really really small--but one thing that I was really appreciating last night was the way Neil Gaiman was selecting the just-right cultural and geographical references for a couple passages from American Gods. Let me trot out these two examples. 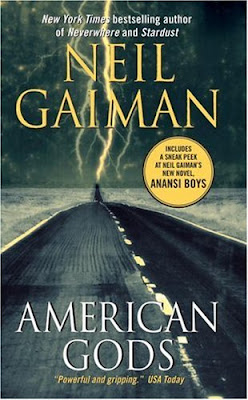 His motel was a good two miles away, but after spending three years in prison he was relishing the idea that he could simply walk and walk, forever if need be. He could keep walking north, and wind up in Alaska, or head south, to Mexico and beyond. He could walk to Patagonia, or to Tierra del Fuego.

Here is a bit a dialogue right after:

"I thought she was my best friend," said Audrey. "We'd talk every day. When Robbie and I had a fight, she'd be the first one to know--we'd go down to Chi-Chi's for margaritas and to talk about what scumpots men can be. And all the time she was fucking him behind my back."

In the first bit, I loved that this guy would think of Patagonia or Tierra del Fuego as the most exotically far places. They're just so vividly, colorfully, wonderfully far places, especially to a Midwestern American, which is what this character is. They're the kind of far places a schoolboy would learn about, and weirdly remember. They are the quintessential far places you wouldn't immediately think of. Like, the Himalayas, that would be an obvious far place, but Patagonia and Tierra del Fuego are so much better. I read this and stopped and thought how perfect it is. I mean, no other place names would work half as well, at least to me, as those.

Also, in the second, Chi-Chi's! How perfect is that as a place for once-wild small-town thirty-something wives to go to bitch about men. (scumpots!) Just slightly more exotic than, say, Olive Garden or TGI Fridays, but still, it's a chain beyond its heyday (it was hot in the 1980's). Chi-Chi's used to be vaguely classy, and now it still clings onto a little of that, but it's also a bit seedy. I mean, it's the brilliantly perfect restaurant.

There's nothing showy or clever about these choices; it's just that they feel absolutely right to me as a reader--so right that they delighted me. I love really good cultural references like that.

I don't feel that this is an easy thing to do. You have to pick ones people know, but if they're obvious, that's no fun. And then, everybody experiences things in different ways, so you have to really think about where the commonality is, or how the echo plays to the ear.

At least the North American ear. I imagine non-North Americans might not get some of these. In fact, Patagonia and Tierra del Fuego will certainly not seem exotic to some on the globe, and does an Aussie even know Chi-Chi's? Though this book, being American Gods, and set where it is, I think it will probably have a lot more American references than most books.

Anyway, I was really appreciating this as a minor art within Gaiman's writing last night. Have you ever come across just a spot-on reference like that?

OMG & LOL!
Okay, you know what's funny? In looking for pictures of Chi Chi's, I came across a whole blog called "Creepy, Abandoned Chi-chis" entirely devoted to creepy abandoned Chi Chi's! Which, I think further goes to show the brilliance of Gaiman for choosing that restaurant.

No, Aussie Tez is not familiar with Chi-Chi's.

LOL. Thank you Aussie Tez! Poor you, no Chi-Chis!

I love Lea's new header, although I have to wonder if you'll be paying for Tori's therapy... ;)

Neil Gaiman completely deserved all the awards he won for that book. Just amazing.

So the weird "exotic" thing I remember from college? The Juan de Fuca plate. Yup. A tectonic plate. I am such a geek.

KB: You are Muy Bueno!

Chris: You are a GEEK. Juan do Fuca! I had a geology t-shirt in college that said, "reunite gondwonaland" (Gondwonaland is what the earth was before the plate broke apart. LOL.

Next you're going to tell me you had a "I water skied on Lake Agassiz" t-shirt. ;)

OMG, faintly remembering that name. What the hell was it?

I have this book waiting to read. Have you ever read Stardust or Neverwhere? Both by Neil Gaiman. Both slightly different but great books.

Please excuse me while I totally melt into fangirlish glee but I am srsly excited as we're going to see himself speak next week in the city. I cannot WAIT!! He is so cool. :) *squee*

I love the books by Gaiman I've read, and actually have the audiobook of this, but haven't listened to it!

It was great to get a midwest perspective! And, nope. No ChiChi's here in SoCal either.

Never heard of Chi-Chis. If I saw one I'd think it was a strip club. So weird, these regional diffs.

American Gods is on the top of my list of favourite books! It's such a great story.
The comics and graphic novels Neil Gaiman wrote are also brilliant. I can advice you to try the 'Sandman' series or 'signal to noise' to ame a few.

"so you have to really think about where the commonality is, or how the echo plays to the ear."

omg lady, how do you think of such smart things to say? you should be a writer! i never would have analyzed using geographical and cultural references but they way you explain it makes so much sense!

and i remember going to chi-chi's with my parents when i was little, it was where i first fell in love with strawberry daiquiris. virgin of course ;)

No Chi-Chi's here (New Zealand) either that I know of :(

Or Ben & Jerry's *sob* which I discovered while living in the UK.

I am a Chi-Chi virgin too. This must be an East Coast chain.

I'm curious CJ - what made you pick up this book? I confess that the cover doesn't draw me at all. Are you a fan of the author?

Mardel: I haven't read either of these books! I bet they're great, though!

Sarah: Wow! How cool! You must report!!

Sully: Oh, I've heard Sandman rocks! I'll have to check it out.

Lusty: Oh, that's a fancy drink for a little girl! LOL. ANd thanks for the kind words!

Orannia: Boo hoo on the B&J!

Rebecca: I picked it up because so many people are SO into him - a tidal wave of recommendations. I'll report in !

Plus he's a Twin Cities author. And American Gods won scads of awards!

That's right, Chris! Hey, do you think he'd want to join us one of these days to pig out and watch Dresden Files? Oh, how could he resist?

Now see, THIS is why you are now one of those author-y people. I would have merely perceived that there was a depth and dimension to the tapestry he wove with his words, but YOU know WHY. I never would have tuned into it.

U r teh smartz.

Aussie Marg isn't familiar either! There are some places that we would have heard of but not that one!

I've never heard of ChiChis so I suppose I wouldn't 'get' on a cold reading of this that that is some sort of outdated chain. However, even as a foreign reader, you can get a sense of what the author is talking about. I suppose what I'm saying is that it works, albeit on various levels. (And non-Americans tend to be pretty familiar with quite a lot of American culture because it's so familiar from TV and film).

Wow, I'm actually in the middle of this one right now and I just keep thinking "Gaiman is a genius. An evil genius to be sure, but a genius."