About that Lord Frederick...

Okay, I’m almost halfway through Private Arrangements now. I think everybody knows the plot of this: husband Camden and wife Gigi reside on different continents. Ten years later she wants a divorce to marry another. Camden returns with his outrageous demand.

So, my great moment of last night’s reading was the highly enjoyable meeting between Camden and Lord Frederick, the man Gigi has chosen to marry. Lord Frederick is an unexpected choice: while Gigi is something of a shark, or at least has that in her, her beloved Lord Frederick is this innocent, pure-hearted artist who is quite younger than her and not at all like Camden.

Upon this first meeting, Lord Frederick doesn’t know Camden knows about him: 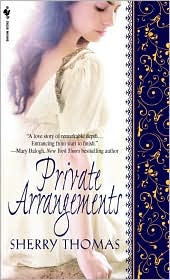 Camden had expected to see a prime specimen of a man. Lord Frederick was not that man. Next to Lord Wrenworth, he seemed all too ordinary, his looks pleasant but unremarkable, his attire a year or two behind the forefront of fashion, his demeanor unsophisticated.

The poor boy clearly struggled, wondering whether he was being played for a fool, but he chose to answer Camden’s invitation as if it had been issued in good faith. "I shall be honored, sir."

In that moment, Camden saw what Gigi must have seen in the boy: his goodness, his sincerity, his willingness to think the best of everyone he met, a willingness that arose less from naivete than from an inborn sweetness.
As a reader, I find it enjoyable musing over what it means about Gigi and how she’s changed or deepened as a person that she’d pick this guy. Though not as fun as discovering what it means through the eyes of Camden. I don’t know if this angle will be exploited or not, but I’m fixated on this Lord Frederick—and also the way art works in here. And the dog, actually. We'll see what happens. Perhaps I will read some more of this book in front of the fire tonight!
Posted by Carolyn Crane at 10:34 AM

So here's my small brain: isn't Gigi the film where the skeevie old dude sings "thank heaven for little girls" ? And he's talking about how they eventually grow up to be courteseans? No?

Nice cover by the way.

LB: I remember that song, but not the movie. But that song definitely wouldn't fly today.

Gigi si that movie Lisabea you have it right and sadly enough that was the same damn song going through my head when I read that the main character's name is Gigi.

Hey Teddypig: Does Jason have any of those MFC t shirts left? I'd LOVE one. OMG I could wear it to San Fran.

Nah, There were only a few of those which is sad because they were like seven or eight screen shirts.

Which means they were hand done but of photographic screen quality.
Like a really really nice rock concert t-shirt.

I think they got sent to mostly the pub people and some of the critique partners and me because I am a pig.

Gigi.. The night we drank champagne!!
Now I have the urge to go get this move from netflix.

I'm on chapter three. Just started it. I finished the first chapter and thought, "Now that's how you should write a first chapter."

I'm actually glad I didn't read it on line first because I would have been frustrated by not being able to read more. Can't wait to dig in this evening.

Also, CJ, finished MIDNIGHT RISING by Lara Adrian last night. In six hours. I did nothing but read. It was perfect. Seriously, I loved it. Can't wait to hear what you think!

Swampthing RULZ. OMG Katie(babs) I had this boyfriend who collected those comic books.

He did not last.

KB: did you get the movie? Is it as good as North and South?
Sarai: I had that song in my head, too - not after the book, but after all these posts!!!
TP: I bet LB will trade you a pony for one.
LB: I'll have you know my husband has 14 boxes of comic books, some of which are probably swamp things.
MK: Midnight Awakening is up next for me! I'll be interested what you have to say about THIS book. I have a bit to say.

CJ: Which movie? Gigi or Swamp Thing?
Both are a love story in their own way. *G*