It occurred to me while in Seattle that the books I talk about on this blog are like tables, like the authors are making all these wooden tables, and some are sturdy, some rickety, some quite pleasing for their proportion, their personality, their fine finish.

And then Meljean Brook comes along with her table, and it’s covered with intricate carved figures and patterns, nuanced little dramas of humanity on every plane. Even a little drawer knob has something special, so it almost doesn’t seem fair to compare it to the other tables.

But you can pull up a chair to it and set your plate of eggs and toast on it and all that, so it’s a table like any other table, but there is SO much more going on.

Examples of things I loved about Demon Night

Of course, Demon Night rocks. Definitely my best read of 2008 so far, and it will take a lot to knock it off of that because it's exciting and thrilling and intense on every level, and shit! I shore did love that Ethan McCabe and his old Wild West ways and his old Wild West talk. Ethan is a hell of a hero—sexy and delightful all at once. I particularly love the stuff he says to Miss Charlie, as he calls her.

Example: There’s this scene where Charlie first finds out Ethan’s an angel after thinking all manner of lascivious thoughts about him - she feels really ashamed about it, and then this: 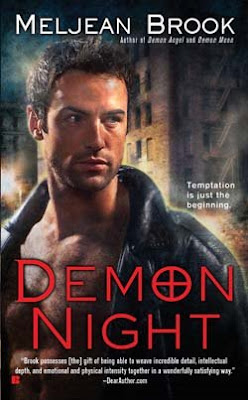 His eyes narrowed. “Whatever you’re thinking that put that fire in your cheeks, you unthink it. I got a pile of mattress stuffing on my back, but it don’t mean I’m wearing a halo.

Brook has that voice just right, and it is so great. Or the Wild West stuff he sometimes says to Charlie during sex? Like this:


“Now, Charlie, you got a choice. If you’re like this—” He pushed her knees down. “I’ll be able to work you just right.”

What guy says that? I loved it. Then, later he goes,

“All right. So we’ve got it just how you like it, then.” His breathing was ragged. “Open your mouth, Charlie. I aim to kiss you all the way though this."

The villain, Demon Sammael, is excellent, too, and a bit quirky, actually. One thing that goes unremarked on in the text was that he was once sheriff of a Wild West town that he named Eden, where he enforced a strangely high level of morality on the people. What is up with a demon doing that? It’s a little touch I totally enjoyed. I hope I see this villain again.

Most of all, I’m a sucker for the kind of emotional sophistication Brook is so great at weaving. Even the simplest exchanges are full of subtext.

More than her first two books, I felt like I got to know these characters—I could describe them with the precision that I could describe friends. Not just Charlie is a bartender and recovering alchoholic, but Charlie has a complex about being slow to realize things, but she isn’t all that slow on the important things. I could rattle off about ten things like that, and that’s not true of most heroines I read, who I tend to know more externally. She is an artist or whatever.

And I know I haven’t read around as much as other people, but let me just say that I have never seen sex scenes that characterize people and move the plot so dramatically while being quite hot. Like the one on page 376 where Charlie is so obsessed with her own neediness, and trying not to be needy and all that, and then you get Ethan losing it, and behaving sexually in ways contrary to how he typically would, and there’s this whole sense of revelation I’m not going to try and capture here, culminating in this moment when she finally sees him:


Ethan was utterly, completely naked.
And so amazing. She rocked forward, watched him clench and lift toward her. Hiding so much, and she hadn’t even known he’d been concealing it.
Did he realize he was revealing it now? Or was he completely lost to this?

Sigh.
Posted by Carolyn Crane at 9:15 AM

Now you're just bragging. LOL! I finished Demon Angel, and have ordered Demon Moon but haven't received it yet. I consider Meljean books to be my "in case of emergency" books. I'm saving for when I hit an absolute block and can't seem to find anything that will work for me.

And this makes it worse. I may have to break down and run to the bookstore and get this one and read out of order. Which is tantamount to sacrilege, I know.

Glad to hear you're enjoying it. If you are, then I will too.

I'm reading The Masque of the Black Tulip by Lauren Willig, which I'm enjoying quite a bit. And I don't usually do funny. Except I wouldn't so much call these books "funny" as "fun."

Hope you're having a great weekend!

So did you see that she, Nalini and Charlaine are doing an anthology? Yes?

I think this is her best one. Charlie really resonated for me. HOWEVER, I'm still ass over teacup for Savitri Murray, so Demon Moon remains my favorite.

MK, I think you could probably do this one out of order. I don't like to read out of order, but you could. Either way, you won't be disappointed, I think. Hope. I've never heard of Masque, aside from on your blog. I'll look forward to that review!

LB: That sounds like a great lineup, though I still chafe against anthologies. Once I get into a story, I like to stay awhile. But Oh, yes, a fine lineup!

I did like Savi. I can't think which book I liked better of these two. I think this one, but not by much.

Word. I read one Sookie story in a pithily (er. not a word) titled 19 authors in 400 page thingies and, yup, haven't picked up another one of hers. Why? I was left thinking: I want more Sookie.

I love Lillith and Hugh.
And Colin and Savi are in a class all their own.
As for Ethan and Charlie they are adorable and his accent is so cute!

CJ: Once again you masterfully articulated MY impressions from reading Meljean's books. (... Why can't I say what I feel as well as you say what you feel.. which is usually exactly what I feel, too! LOL..) You are always right on the money about what makes Meljean's work so amazing. Your metaphor with the tables is so incredibly true!

And I simply adore that scene you describe when Charlie first finds out Ethan is a guardian. The way she is in complete awe of him and the way he tries to knock her reverence of him down a few notches.

I also agree with you about how fascinating Sammael is. Or his motives and intentions, at least. I think it is a sign of some interesting shifts in the demon world. We'll see...

Demon Night is also at the top of my 2008 list so far, as well. There's still something about Colin and Savi's story that twisted my heart a tiny bit tighter than Ethan and Charlie's, but not by much.

No, no, no, MaryKate... read Meljean's books in order. I know you can probably get away with not... but for the overall story arc of the series, I think it is best if you do. But hurry up already! These are not 'in case of emergency' books. They are 'read these in urgency books!' ;)

LOL! Yes ma'am! I'll bump them up. It's just that Meljean books take a lot of concentration from me to keep the story straight.

OK, I have Virgin River by Robyn Carr up next, but I'll read Demon Moon after that.