Whew! That was fun. 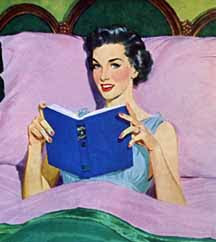 Spoiler level: medium (for relationship, but not the mystery)

So I finished this book, and I sure see why my pal lisabea, who turned me onto it, loves Adrien, the narrator here. This is a narrator you want to spend time with—smart, funny, vulnerable, curious. As I said below, the book has the one-two punch of great writing and being put together right in terms of plot and characters. Maybe that’s a one-two-three punch then.

I enjoy this book in the way I enjoy Evanovich’s Stephanie Plum series, and I would recommend this to lovers of that series, of which I am one. Basically, this is a really goddamn entertaining non-ass-kicking first-person narrator solving a mystery.

But I would contrast it with that series, too. For one thing, the writing is more dazzling (sharper, funnier, more pop culture referential, also darker). For another, the psychological realism is higher, by which I mean the people here act like they really would act in real life, or as close to real life as characters in a novel get. So like, if a car blew up in this book, or if a body part was delivered, you would get funny observations from Adrien, but he would find it awfully disturbi 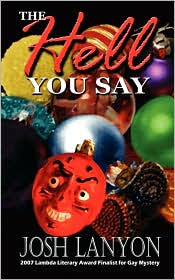 ng, and it would just mean more, and the ripple effect would be stronger. I’m not saying that makes it better than Evanovich, just a different sort of meal. I would say Evanovich is lighter, breezier, more escapist.

Also, the narrator, Adrien, has a cop boyfriend, Jake. I like Jake in the way I like Morelli, and I like these guys together, and I love their sex scenes. There's even this "I canna be gentle with you, lassie" sex scene I really enjoyed. I am rooting for this relationship in spite of a certain turn of events I will not divulge. I am! Please let them be together in Pirate.

I don’t know what possessed me to start with #3, but I am so definitely going back to read the first book, Fatal Shadows, and the second, A Dangerous Thing. Then, Death of a Pirate King is due out in August 2008. Ah, a new series to love. Hello. Thank you.
Posted by Carolyn Crane at 9:20 AM

Email ThisBlogThis!Share to TwitterShare to FacebookShare to Pinterest
Labels: Josh Lanyon, The Hell You Say

See your the problem, your the enabler to my book addiction. Now i have to go and get a damn book. But because I suffer from OCD I have to start with one. DAMN YOU CJ how the hell am I suppose to give up buying books when you recommend them???
So I just ordered the first one from Amazon.

Jeez, thank you very much. You're very kind. I think I owe Lisabea my first born child or something given the way she's convinced readers like you and Sula to try these stories. I'm flattered -- truly.

(And, by the way, I loved the pirate reference in the previous post.)

And I strong armed them all into My Fair Captain as well. By the way, Josh, have I introduced you to my, er, friend Nate?

CJ~Jake as Morelli. I'd like that even more if we could get Ranger involved. And now I sound like Katie(babs). But I have made this comparison as well. And to Sookie, who never gets the HEA.

Oh, cool, Sarai, you will be ahead of me on that one. I hope it's as good as this one. Sorry about contributing to your delinquency!! But what a fine vice to have.

Josh, wow, thanks for visiting! Yeah, LB convinced me on the one book, but you closed me on the series.

LB: I don't need a Ranger here, but then, I'm still a Morelli girl. Actually, to me Jake is a Ranger-Morelli combo.

CJ~So what was your take on the dramatic incident between our two men?


Okay, since stupid blogger doesn't send me email notification of comments, I only just saw your question. Gosh, did I discuss this with you already, or did I just think I about it? I discussed it with Mark, actually. Because I found myself thinking, if a man did this to a woman, I would say the woman must leave him. I'm talking about the shove, and even the last sex scene could've been interpreted in certain ways...you know.

But with the shove, you have a man doing it to a man, and I'm like, Jake's okay!
Like, why can't a man, say, shove a woman and make her fall down like that? Because women are physically weaker? Adrien is physically weaker than Jake, so why is okay there? And then there is the cultural thing. There's more of a line being crossed when a man shoves a woman. Is that it? Or is it because men have all that testosterone, and it's just more their thing to be rough?
If this is a man and a woman, I would say, this will escalate, get away from him, sister. Why am I not saying that with Jake and Adrien?

Okay, a test to see if I fixed the blogger problem.

I absolutely loved that Josh didn't back away from this confrontation. It's so much Jake not coming clean with who and what he is and how Adrien is cool with himself. Jake loves him (obviously) and is in that terrible spot and, if you read the interview, Jake's girlfriend (wife?) loses the baby later...so all this sacrifice and lying boiling in side is for nothing. It becomes so clear to us that Adrien can't settle for a guy who won't be love him openly. You go Adrien.

My notifications are fixed! Earthlink had magically switched me from NO spam filter to MED spam filter, and it was filtering out notifications from my blog but NOT ANYBODY ELSES. Isn't that weird?

Yeah, that was great, and I respect how Josh just sort of let it sit there, and didn't define it overly or anything. God, I want more of these two. He is probably done writing the next book. Are the first two as good? I'm getting them anyhow, but how do you rate them?

Well the first one is bloody and goooood but there is no Jake/Adrien relationship yet. I LOVE that book. But it's more a Sookie Stackhouse than a romance. The second? It's good, but not as good as Hell You Say. Jake is so lousy with issues.However: Best First Love Scene m/m hands down. It's going right up there for the Lisabea Weenie Awards...is that what I'm calling them?

Oh ho ho kay, maybe I start with the second one. What do you think about that, and then maybe move to #1...or maybe to #4.

No do book 1 first. I'm not saying Adrien doesn't get laid. Heh. And if Josh is reading this I swear that's not IMPORTANT and I'm not judging it on the 5 chili peppers of heat scale (oopsie)

No, it's NOT IMPORTANT AT ALL. Okay, but, errr, maybe I will read that #1 first after all.

Not important. Nope. Not at all. But MFC gets 5.

I've had 3 glasses of pino grigio and am about to play cards. WOOT. Good luck.

Color me SO JEALOUS. I wish I was there. Have a great afternoon. Er, evening.

In reading my earlier comments I can see that the use of alcohol played a huge part in my sentence lack of structure. Holy moly.

I just popped on to look for the digital portion of my deductions. Hey, I didn't see anything wrong with your sentence structure. But I never told you, I once commented drunk on your blog, and then the next day I was like, oh, that was a weird drunk thing to say, and then I went to look at it and it wasn't there, and I never knew if you had taken it down or if it was one of those comments that got mysteriously lost. But why would you take a comment down? So I figured it was lost. It wasn't that weird. Why am I saying this on my own blog? Why am I telling this story? And really does anybody read this stuff except for five people and a lurker from Bangledesh?

Oh, yeah, and any clients who decide to google me. Doh!

Hm. I remember there being a comment deleted by carolyn jean...maybe you were that drunk? Man, that'd be great if I could find it and post it as a big splashing doo-dah.


I'm toast for Manlove Monday. I've had a JL Langley interview done for 2 weeks and for what ever reason I can't get my email to get to her...ugh.

So what should I do? I was thinking of a staging a coup at the the tournament.