Note: Some terms are intentionally misspelled so as to not further torment the wo1f secks image seekers of the world!

Another note: This is in honor of Kerry Allen's Witchblade boobs post, which is the weird seach term she always gets.

You will probably be surprised to learn that this blog used to be one of the top stops for people all over the world googling in search of an image of "wo1f secks" (but spelled correctly). This used to totally mystify me on a number of levels.

For one thing, the searchers were almost always from far-off (to me) lands like Bangalore, Brunei or Madagascar, and sometimes countries I've never heard of with names like Kipor, with the occasional obscure Idaho town thrown in.

And then, of course, there was the whole question of, what is the deal? Are these searchers interested in it from a wildlife perspective, or is it some sort of human sexual activity? This spurred me on my own search for knowledge, and it became clear that wo1f secks is sometimes a furree fetish, sometimes a term used in the gay community, like you have bears, and wolves, and when a wo1f has secks with somebody, that's wo1f secks, and then you have the Mutual of Omaha version, where actual wolves have secks.

Anyway, here is the image the searchers always landed on. I am sure they were bitterly disappointed. It's from this post about Kelley Armstrong's book Bitten, entitled "Wo1f secks vs. Human secks" (but not spelled like that) and it's about how this one reviewer on Amazon really REALLY wanted the wolves to have secks while in their wolf bodies.


I love a good shape shifter tale as much as the next gal, but I've never been a shifted sex person. But hey! Who knows what 2009 will bring.

As I pondered, I further realized that the reason my searchers only came from distant foreign capitals is that they don't read English well, and thus don't recognize from the snippet of Thrillionth Page text provided by Google that the image they are about to click on will NOT seem sexy to them at all. 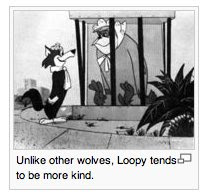 The mystery deepens
So today I realized I hadn't had any wo1f secks visitors for a long time and I was sort of bummed. I was like, is somebody else out there offering a seemingly surer route to a wo1f secks image? 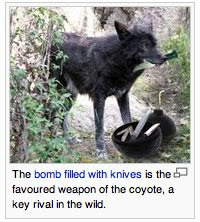 I love that coyote picture. The Internet is just so crazy!

Anyway, oh, I just realized, I actually sort of have a Holiday gift exchange cartoon that has some shape shifting characters in it. Though not any wo1f secks.

Today: The fun of Bingeduckia rages on--there's another big scavenger hunt contest, plus a wee post from yours truly.
Tomorrow: The Italian Baby Food Baron continues at Tumperkin's. Also, this week I got a Bookworm award, AND a Kreativ Blogger award! So cool! So I will be awarding them onward, PLUS if I finish Demon Bound tonight I will have tons to say about it. And, of course, another gift exchange.
Posted by Carolyn Crane at 8:37 PM

OMG, that is hilarious. I'm not a huge shifter sex person. I really hated Yasmine Galenorn's Changling book where the girl was a kitty cat. She had sex with the Tom cat, but was a virgin in her human body. WTF!

Oh, wow. LOL! I guess I missed that one. Though, by that theory, you could have the heroine lose her virginity twice. Or, have that special first sex with the hero twice. Hmmm.

Ewwww. Once was bad enough, okay.

CJ: LOL! Thank you, thank you. Wo1f secks and Sookie. Just the laugh break I needed!

Scooper: Yikes! I guess I should be glad for more reasons than one that Witchling was a DNF for me, so I missed that "special" scene in book 2.

Sookie will be a very sore girl for Christmas! She will have a man or furry creature O_O for every day of the week!

I think Blogger just wanted me to come see your drawring (also misspelled intentionally). CJ, you are a hoot. I love this post!

BTW, that coyote looks nothing like any of the coyotes I grew up with. That one looks evil!

Oh, and I don't mind shifted sex scenes. I don't *love* them, but I have read some really good ones.

Renee: Back to work on the dissertation!

JenB: It seems like somebody should be able to do a good one. Maybe I"ll have to investigate!!

Omg you are so funny. I can't believe you would get wolf secks people visiting! Who knew?

Love the gift exchange cartoon. You truly have a knack for them!

Renee: I'm so done with the series, especially catgirl.


Katiebabs: You're so right about Sookie. I bout fell out my chair when I read that. *grin*

Lol. Yep the internet is an insane place sometimes.

Tracy: Hey, thanks! We'll see if I run out of ideas. They may get lamer and lamer. I've already had to nix one for being mean spirited.